After son Taimur, Kareena Kapoor posted Saif Ali Khan's picture on Instagram. Her post sharing his love for music and 'playing his own tune' made hearts flutter

After missing from the world of social media for long, Kareena Kapoor Khan made her fans’ dream come true by joining Instagram recently. The actor, who is into the 20th year of her career, teased fans first and got over one million followers within no time. While her first posts were surprisingly for a sports brand, she followed it up with the most special people in her life.

Kareena's son Taimur’s pictures and videos are all over social media, but it couldn’t have got more special than the Refugee star sharing one of the duo. One knows her love for the ‘main apni favourite hoon’ dialogue, but through her caption she conceded that the little one was the only she’d allow to ‘steal’ her frame.

After a few hours, Kareena posted another black-and-white picture, this time for her ‘love’ Saif Ali Khan. The Sacred Games star is known for his love for music. Kareena had a sweet take on her husband’s love for music, as he held the guitar in his hands while seemingly looking at Taimur, writing how he always played his own tune.

My love... always playing his own tune

The post won hearts, getting 2.84 lakh likes in just four hours. Celebrities like Amrita Arora and Siddhant Chaturvedi reacted, the former sharing her love for ‘Saifu’ and the latter hoping he joins the photo-sharing medium soon. 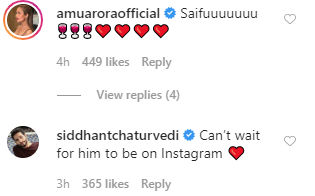 Meanwhile, on the professional front, Kareena delivered one of her career’s biggest hits with Good Newwz last year. She is gearing up for the release of Angrezi Medium. The actor plays the role of a cop in the Irrfan-Radhika Madan-starrer.

Saif, on the other hand, also tasted his career’s biggest success with Tanhaji: The Unsung Warrior and was also seen in Jawaani Jaaneman. He is currently shooting for Bunty Aur Babli 2.

READ:Kareena Kapoor Khan Clears The Air About Being Offered A Film With Sister Karisma Kapoor