Kareena Kapoor Khan is often regarded as one of the biggest fashion icons in the Hindi film industry. Since her debut in 2000, she has been loved by her fans for her various performances. Over the years, Kareena has seamlessly transitioned various different styles. She also is one of the fittest stars in Bollywood. She recently took to her Instagram to share a picture of herself who is under self quarantine and this is what she has been doing. 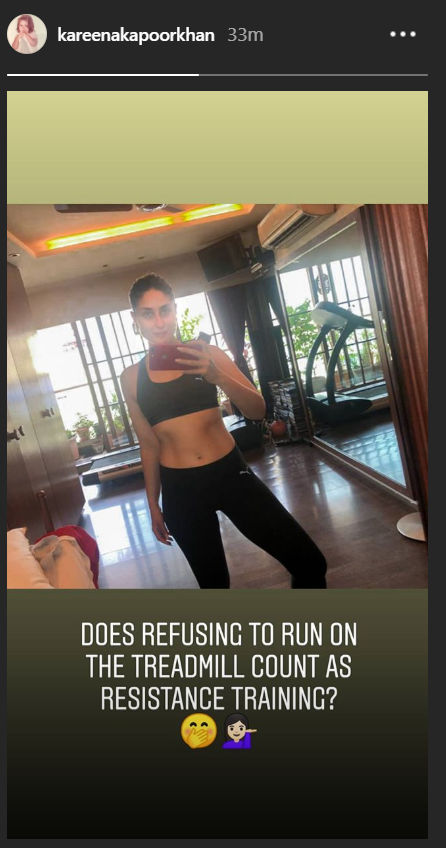 Kareena Kapoor took to Instagram and shared a story where she is seen in black sportswear. She captioned the picture by writing “Does refusing to run on the treadmill count as resistance training?" This funny statement comes after Kareena Kapoor and Saif Ali Khan have resorted to social distancing by staying indoors. The caption on her picture sure does make one think about what she has written.

Apart from this, Kareena Kapoor is using her alone time well. She recently also shared a picture from her childhood which was loved by fans. Other than this, she also shared a picture with Saif Ali Khan. In the picture, Saif is seen reading a book while Kareena uses Instagram. She captioned the picture by writing “Looks like he is 'booked' for the week... While I Instagram 🤷🏻‍♀️". Take a look at the post here.

PEOPLE HAVE PLEDGED SO FAR
Aparshakti Khurana sees hope after lockdown; says 'no one will take anything for granted'
Varun Dhawan, Ranveer Singh, and other actors who have displayed amazing rapping skills
Amitabh Bachchan shares his father's poetry which is HIGHLY relevant in today's times
Deepika Padukone reveals the one thing that she is most fearful of; Find out what it is
Shraddha Kapoor and Kiara Advani's stunning Lehenga looks; see pics
DO NOT MISS
COVID-19 CASES IN MAHARASHTRA
DELHI POLICE NOTIFIES TO MARKAZ
45 PEOPLE FROM TN TEST POSITIVE
NETIZENS HAIL ROHIT SHARMA
CM YOGI CONDEMNS BAREILLY INCIDENT
SPECIAL NIA COURT DENIES BAIL