Karisma Kapoor took to her social media account to share her new selfie. The actor's mesmerising selfie cannot be missed by her fans. Here is a look at the pic.

Amid the Coronavirus lockdown, several Bollywood celebrities have turned to social media to kill their boredom. These celebrities are sharing their daily routine on social media with their fans. Celebrities are also requesting their followers to stay at home and to do something productive during this free time. Actor Karisma Kapoor is very active on Instagram and likes to keep her fans updated. Karisma Kapoor keeps posting several pictures on her social media account. Recently, the actor posted a brand new selfie and her fans loved it.

Karisma Kapoor took to her Instagram account to share her sun-kissed selfie. Fans admired her beauty in the comments section of her post. Karisma Kapoor posted the selfie from her balcony. In the picture, Karisma Kapoor looked gorgeous with her open hair covering a side of her face. Karisma Kapoor captioned the picture as "Sunkissed solitude..ðŸŒž#stayhome #keepeveryonesafe”.

Here is the picture posted by Karisma Kapoor 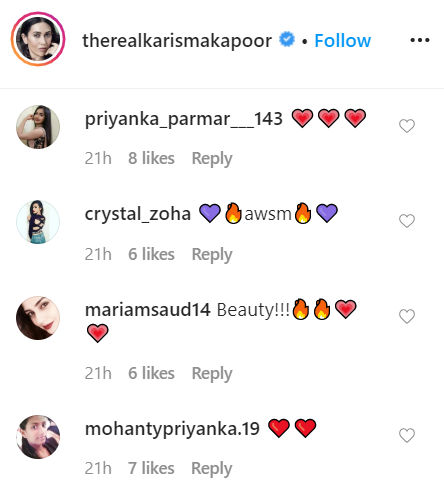 On the work front, Karisma Kapoor was last seen in the drama web series Mentalhood. The series is released on the online streaming platform Zee 5 and ALT Balaji. Mentalhood is produced Rupali Guha under her banner Film Farm India as well as Ekta Kapoor and Shobha Kapoor. The show Mentalhood features Karisma Kapoor alongside Sanjay Suri, Sandhya Mridul, Shilpa Shukla and Shruti Seth in the pivotal roles. Mentalhood started streaming from March 11 this year.

Watch the trailer of Mentalhood here