Kartik Aaryan Reveals His Favourite Performance Of The Year 2020; See Which One It Is

Kartik Aaryan who has given back-to-back hits, has now already revealed his favourite performance of the year, 2020. Read to know who is the other actor.

Kartik Aaryan is one of the most popular emerging actors in the industry. He has gained much fan following with his performances in Pyaar Ka Punchanama, Sonu Ke Titu Ki Sweety and Pati Patni Aur Woh to name a few. Read to know, who is Kartik’s favourite performer of the year 2020.

New Year 2020 has just begun and only a few Bollywood movies have released in theatres. However, Kartik Aaryan has already declared his favourite performance of the year and it was none other than Deepika Padukone in Chhapaak. Kartik took to his stories on his official Instagram handle to express his emotion by praising Deepika and also the director of the film, Meghna Gulzar. 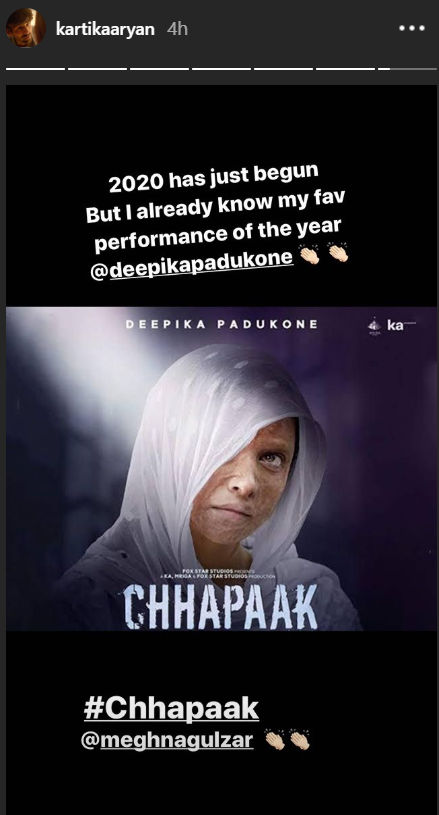 Kartik Aaryan and Deepika Padukone seem to be the new besties in Bollywood. The two first took the internet by storm when, Deepika requested Kartik to teach the hook step of his song Dheeme Dheeme from Pati, Patni Aur Woh. They met outside Mumbai Airport, surrounded by fans and paparazzi.

Kartik then taught Deepika the trending hook step, while everyone was cheering. After several attempts, Deepika caught up with Kartik and completed the step. Many found them adorable together, while a few criticised them for doing this at an airport, nevertheless, they seemed to have fun.

My heart goes out to Laxmi Agarwal on whose life the film is based upon. You are a real hero. You have inspired me and am sure your story will inspire millions more. #Chappak

More power to these 3 women. @meghnagulzar for making an amazing film on a topic that needed to be discussed. @deepikapadukone for making a brave choice as an actor and producer and acing it to the tee. #LaxmiAgarwal for sharing your story with us. You inspire me. #Chaapak

Pain is real ,tears are real ,but so is the hope & pride !Thank you for Humanising this unjust reality ! Chhapaak pierces your heart !Such stories must be told & celebrated !Deepika’ smile as Malti is my favourite❤️ @deepikapadukone @masseysahib @meghnagulzar @foxstarhindi

Chhapaak clashed with Tanhaji: The Unsung Warrior at the box office, which received rave reviews. Box office collection of Chhapaak has been in the low side with around ₹32 crores, till now. The movie might receive a flop or average final verdict.