Kartik Aaryan and Sara Ali Khan have begun the promotion of their upcoming Imtiaz Ali directed drama film 'Love Aaj Kal' which will release on February 14.

Kartik Aaryan and Sara Ali Khan have kickstarted the promotions of their upcoming film Love Aaj Kal with an appearance at the Bigg Boss 13 house. Kartik took to his Instagram to post a hilarious video from their visit to the sets of the reality TV show. The two actors can be seen play acting with each other as Kartik Aaryan imitates contestant Shehnaaz Gill and Sara Ali Khan impersonates Sidharth Shukla.

Sara Ali Khan also updated her Instagram story for her fans to notify them of her appearance on the reality TV show. The actor posted a photo of herself with actors Salman Khan and Kartik Aaryan as seem to be in the middle of a dance. She captioned it in her typical style of poetry. 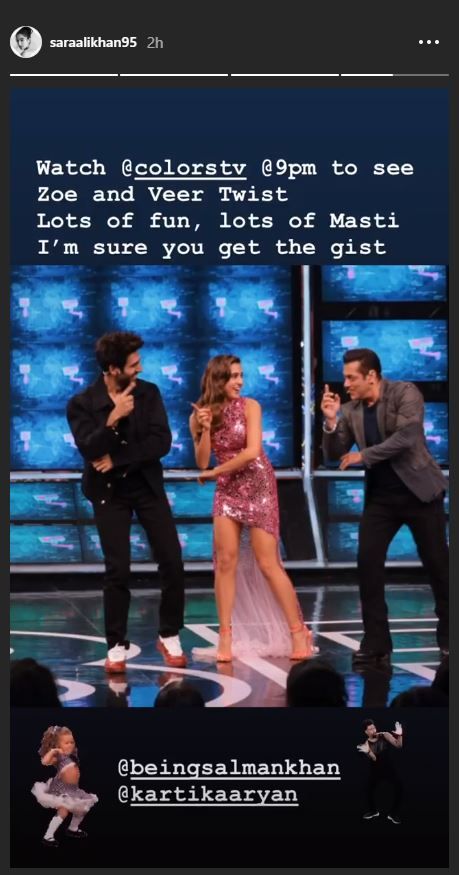 The trailer of the highly anticipated Kartik Aaryan and Sara Ali Khan starrer Love Aaj Kal was unveiled on January 17, 2020. While it has garnered mixed responses from moviegoers, a lot of the fans have compared the new film with director Imtiaz Ali's 2009 film of the same name which featured actors Saif Ali Khan and Deepika Padukone. At the trailer launch event, both Sara Ali Khan and Kartik Aaryan clarified that their movie is nothing like the earlier film and that it is not a sequel.

Meanwhile, Sara Ali Khan's father Saif who was in the original film opposite Deepika Padukone, in an interview said, "I still remember shooting for Love Aaj Kal... I kind of liked my trailer more. So... uh... what to say. But I wish them all the best." Just like the first installment, this film's trailer too shows two love stories — one between Kartik and Sara, which is set in 2020, and another set in 1990, between the Pati, Patni Aur Woh actor, and newcomer Arushi Sharma.

Take a look at the trailer: