Kartik Aaryan's Latest Pic Is Proof That Nothing Can Mess With His Hair; See Here

Kartik Aaryan is an avid social media user. Kartik Aaryan recently shared an illustration made by his fan which is unmissable. See here

Kartik Aaryan is an avid social media user. He is often seen sharing several pictures and videos from his personal and professional life. The 'Pati Patni Aur Woh' actor recently took to Instagram to share an illustration picture made by his fan. In the picture, one can see Kartik Aaryan giving a side profile intense look. He is also sporting an olive green t-shirt under a blue denim shirt. In the picture one can also see a crown in the air that is right on top of Kartik’s head.

Reposting the picture Kartik Aaryan went on to give a quirky message, he said: “Even The crown can’t mess with the hair.”  Kartik Aryan loves his hair and also comes up with quirky hairstyles as he always tries to enhance his look. His fan who made the picture also went on to write, “Kartik with the krown.” Check out the picture below.

As soon as he posted the picture, fans went on to comment on all things nice. One of the fans commented calling him ‘king’ while the other went on to call him a ‘stunner’ check out a few comments by fans below. 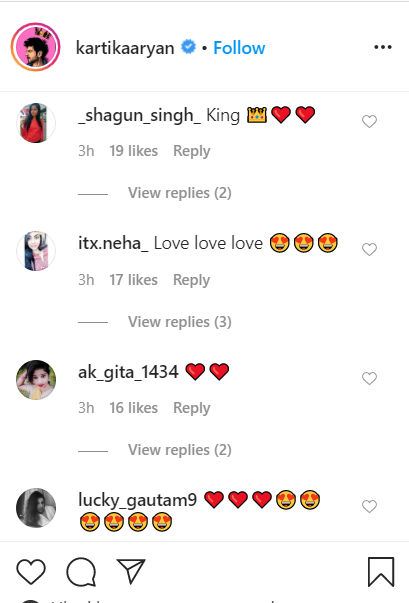 The actor was last seen in the film Love Aaj Kal alongside Sara Ali Khan. The duo was praised for their on-screen chemistry. Kartik Aaryan will next be seen in Anees Bazmee’s next Bhool Bhulaiyaa 2. The film will also star Kiara Advani and Tabu in pivotal roles. The film is reported to be a sequel of the original film Bhool Bhulaiyaa.