While under lockdown, Luka Chuppi co-stars Kartik Aaryan and Kriti Sanon have playfully been at each other's tails to outdo themselves in trolling with every post. Panipat actor Kriti Sanon shared a collage of her photos recently and captioned it, "Yup I’m a thinker ðŸ’­ðŸ’­ Sometimes.. An Over-thinker". The actor wore a pretty white and yellow coloured dress and posed with a thinking pout on her face.

While Kriti Sanon's fans poured their love for the actor through their likes and comments on the post, her Luka Chuppi co-star Kartik Aaryan has an epic observation about her dress. The horse painted on Kriti's ensemble prompted Kartik to ask the hilarious question, "Aapki kameez Majnu bhai ne paint ki hai?" (Has Majnu bhai painted your dress?).  Kriti responded by telling him that it's by the same person who makes his clothes.

This wasn't the first time that the actors made their fans laugh out loud with their fun banter. Earlier last week, Kartik Aaryan had shared a selfie which showed his dishevelled hair and heavily bearded face. He asked his fans, "Phir se sexy dikhne ka mann kar raha hai. Daadhi nikaal dun?". (Want to look sexy again. Should I shave the beard?).

Kriti Sanon was quick to respond with a 'Yes' asking him to shave off the facial hair. Kartik Aaryan had a one-up for this comment as well. He trolled her by responding with, "Main toh daadi kata lunga aap eyebrows kaise banaogi". (I could trim my beard but how will you shape your eyebrows?). 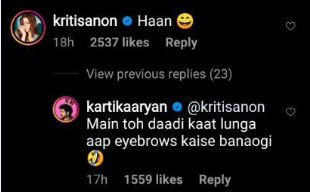 Kriti Sanon will be seen in Laxmi Utekar's upcoming film Mimi where she will be seen in the role of a surrogate mother. The film was slated for release in the month of July 2020, but is likely to premiere on the digital platform, as per recent reports. Meanwhile, Kartik Aaryan will be seen next in the sequel to the Akshay Kumar starrer Bhool Bhulaiya directed by Anees Bazmee. Actors Kiara Advani and Tabu will feature along with Kartik in the horror-comedy film slated to release in theatres on July 31, 2020.

The actor will also be seen in Colin D'Cunha's upcoming film Dostana 2 which is also a sequel to the Abhishek Bachchan-John Abraham starrer Dostana. The film also stars actors Janhvi Kapoor and newcomer Lakshya. The film will reportedly release by the end of this year. The actor has also signed up for his first action film directed by Tanhaji fame Om Raut.