Kartik Aaryan has shared a hilarious picture of himself as an old man & called for heroines to cast in the iconic Amitabh Bachchan-Hema Malini film 'Baghban'.

Kartik Aaryan has been beating the lockdown blues with a lot of activities while at home. The actor has shared his baking, eating, watching his own films, making rap videos and also doing the dishes updates through his social media. On Friday, the 9th day of the national lockdown, Kartik has shared a rather hilarious update with a photo of himself after using the ageing filter through a popular app.

The Pyaar Ka Punchnama actor looks like a striking old man even with wrinkles on his face. His caption on the post, however, left his fans and his friends from the industry in splits. With his edited photo, the actor wrote, "Ageing Gracefully in Lockdown ðŸ‘¨ðŸ¼‍ðŸ¦³
Lets Remake Baghban now. Casting for Heroines role ðŸ‘µðŸ» Pls send in your entries.".

While his fans couldn't get over his looks and called him 'handsome', actors Arjun Kapoor, Siddhant Chaturvedi and Bhumi Pednekar poked fun at him through their comments. Arjun Kapoor thought Kartik looked like TV actor Ronit Roy and the latter gave him options to choose from for the role of his leading lady in the supposed Baghban remake. Bhumi Pednekar hilariously trolled at struggling newcomers who look for opportunities. 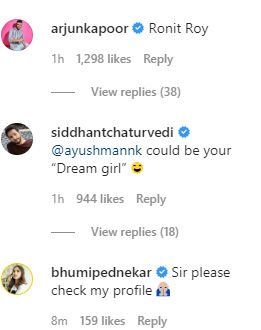 What's next for Kartik Aaryan?

Kartik Aaryan will be seen next in the sequel to the Akshay Kumar starrer Bhool Bhulaiya directed by Anees Bazmee. Actors Kiara Advani and Tabu will feature along with Kartik in the horror-comedy film slated to release in theatres on July 31, 2020.

The actor will also be seen in Colin D'Cunha's upcoming film Dostana 2 which is also a sequel to the Abhishek Bachchan-John Abraham starrer Dostana. The film also stars actors Janhvi Kapoor and newcomer Lakshya. The film will reportedly release by the end of this year. The actor has also signed up for his first action film directed by Tanhaji fame Om Raut.

PEOPLE HAVE PLEDGED SO FAR
LATEST NEWS
View all
4 hours ago
Faraz Arif Ansari extends Pride Month wishes with a still from LGBTQ film 'Sheer Qorma'
4 hours ago
Athiya appalled by Kerala elephant's death, says "They think we are cute. We failed them"
2 hours ago
Are Shahid Kapoor & Mira Rajput at Radha Soami Satsang in Beas? Video goes viral
4 hours ago
Kartik Aaryan reveals why he wants to marry a girl like Deepika Padukone; Read here
5 hours ago
Abhishek Bachchan issues a 'Nisarga' warning to Mumbaikars about situation getting worse