With IIFA To Be Held On Home Turf, Kartik Aaryan Sends Quirky Invites To Janhvi & Katrina

Actor Kartik Aaryan has been sending out invites to fellow stars from the industry as they would be attending a mega event in his home town in MP.

Kartik Aaryan who was last seen in Imtiaz Ali directorial Love Aaj Kal 2020 is very active on social media and is often seen interacting with his fans on it. Recently, Kartik was seen sending out invites to fellow stars from the entertainment industry but in a quirky way.

As the IIFA 2020 has been announced to be held in Indore, Kartik Aaryan seems very excited about it since the city happens to be the actor's home town. He took to his social media and posted a picture of himself with IIFA screen boards in the background. In the caption he wrote that the IIFA entourage would be arriving his home city. Check out the picture below:

As the actor had injured himself recently, he was seen posing in front of cameras with an arm sling on his right arm. The actor looked dapper in his post in spite of having a cast and an arm sling on his injured arm as can be seen in the picture. Jahnvi Kapoor was quick to highlight the fact that Kartik Aaryan was welcoming everyone with a broken arm. To this, Kartik Aaryan responded saying that in his hometown, people welcome their guests from their hearts, and she should just visit the city irrespective of other things. 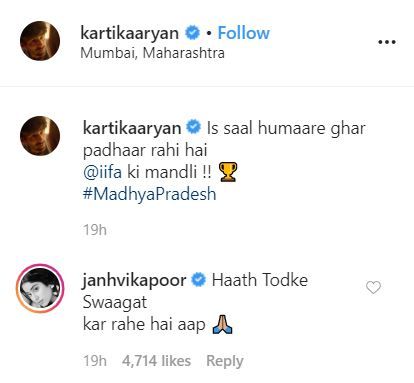 Kartik Aaryan's response to her 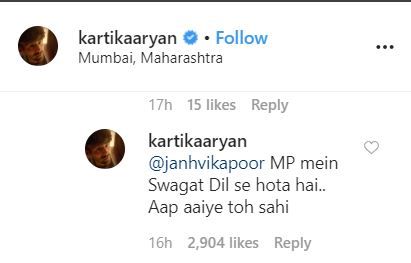 At the IIFA 2020 press conference, actor Katrina Kaif was seen revealing that she is very excited about IIFA 2020 as it is being held in MP. She further revealed that she loves the food of that region. Hearing this, Kartik Aaryan responded that he would get her home-cooked food made by his mother, she should come to visit them.

Read  |Here Is How Janhvi Kapoor Will Celebrate Her 23rd Birthday On March 6; Details Inside