Katrina Kaif gave Alia Bhatt a hard time in a throwback video to wish her for birthday. Ranbir's sister Riddhima posted a moment of Alia with the Kapoors.

Alia Bhatt had a memorable time as she turned 27 on Sunday by partying with her ‘girl gang’, best friend Akansha Ranjan Kapoor, sister Shaheen Bhatt, among others. And it was a similar atmosphere on social media, with wishes galore from celebrities. While her family posted adorable pictures of the Kalank star and stars too had sweet ways to convey birthday greetings, some of the interesting wishes were from Katrina Kaif and Riddhima Kapoor Sahni.

It is a known fact that Katrina and Alia were close at one time, when they were termed ‘BFFs’ and even shot for a friendship-based chat show then. The actor-duo used to even be gym buddies then. Katrina posted one of the videos from that time, where she is making Alia do squats, to wish her.

Alia is seen having a hard time, even expressing her pain while performing the exercises, while Katrina is the hard taskmaster and in no mood to relent.

The message was completely in contrast, wishing her ‘Happy Birthday’ and asking her to “Just keep being you.” 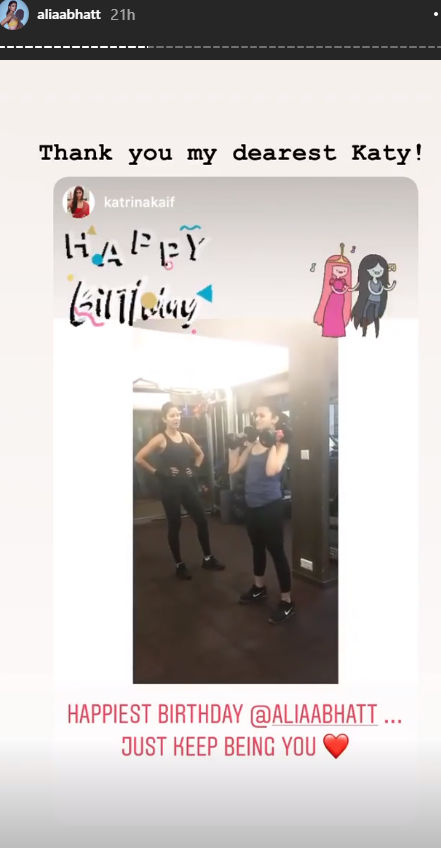 While the equation between the two has reportedly changed since Alia started dating Katrina’s ex Ranbir Kapoor, the duo has been seen bonding again, getting snapped meeting two times in the last few weeks.

READ: Alia Bhatt Shares Cute Pictures Of Her Cats On Instagram; Here Are The Best Ones

Meanwhile, Ranbir’s sister Riddhima Kapoor Sahni called Alia ‘cuteness’, along with a picture of the Kapoor family, where her husband and daughter, Rishi-Neetu Kapoor, Rima Jain are goofing along with the couple.

Be it Madhuri Dixit, Sonakshi Sinha or Arjun Kapoor, there were wishes galore for Alia Bhatt. The best ones, however, were shared by her mother Soni Razdan and sister Pooja Bhatt, as they featured cute throwback pictures of Alia.