Alia Bhatt visited Katrina Kaif at their residence in Mumbai on Sunday amid their recent bonding. Priyanka Chopra too joined the duo, making netizens excited

The Alia Bhatt-Katrina Kaif equation has seen different phases over the years. The duo was known for being ‘BFFs’ at one point, appearing on a friendship show together and even working out together. However, the equation reportedly witnessed a change after Alia started dating Ranbir Kapoor.

READ: Deepika Padukone And Alia Bhatt In Sabyasachi Sarees; Who Donned It Better?

The two were, however, then seen wishing each other on birthdays and more, making headlines for it. Katrina and Alia now seem to be returning to a similar phase when they started out as friends. The stars meeting together at Zoya Akhtar’s house a few days ago had raised eyebrows.

On Sunday, the duo met each other once again. This time, Alia was snapped by the paparazzi as she visited Katrina’s house in Bandra, Mumbai. While some netizens wondered if a film collaboration could be on the anvil last time, this time another star joined them.

READ: Alia Bhatt's Earrings Can Be Inspiration For Your Next Traditional Outfit, See Pics 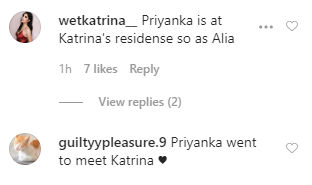 Many netizens expressed their excitement as the actor-trio came together under one roof. With Priyanka also becoming a producer in recent times, and visiting India only occasionally since her marriage, one can’t deny that a collaboration could be a possibility of their meeting. The trio spending some quality time with each other could also be a possibility.

Meanwhile, on the professional front, Alia will be seen in three films this year. Sadak 2 hits the screens in July, Gangubai Kathiawadi releases in September and Brahmastra in December.

Katrina Kaif will be seen in Sooryavanshi in March.

Priyanka Chopra has completed the shooting of the Netflix film The White Tiger, amid being linked to numerous Hollywood projects.

READ: Alia Bhatt's Films That Have An IMDb Rating Of 6 And Less! Check Out The List