Katrina Kaif recently posted a heartfelt birthday wish for her film director, Rohit Shetty amidst all the rumours about the two parting ways

Amid rumours of rift between Katrina Kaif and her Sooryavanshi director Rohit Shetty regarding a statement that the director made about the actor, the Bharat actor took to Instagram to share a heartfelt birthday wish for the director. Check out the story posted by her below. 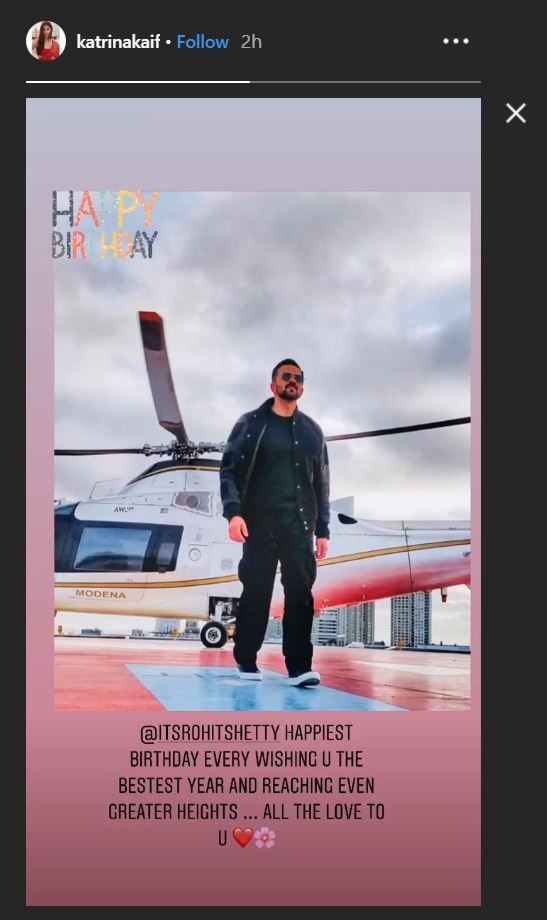 Read | Did Rohit Shetty Unfollow Katrina Kaif After 'No One Is Going To Look At You' Row?

As the trailer of the upcoming film Sooryavanshi released, it broke the internet as the fans were intrigued to watch the film after seeing the power-packed trailer. The trailer looked promising and that is all media portals were talking about until Rohit Shetty revealed a behind-the-camera incident in front of a media portal. Rohit Shetty told a media portal that after shooting a scene which had Akshay Kumar, Ajay Devgn, Ranveer Singh and Katrina Kaif, all in the same frame, Katrina came to him and asked if they could re-shoot the scene as she was blinking in the scene.

Read | Deepika Padukone Replaced By Katrina Kaif In Prabhas' Next With Nag Ashwin?

To this Rohit Shetty told her that no one would see her blinking as their focus would be on the male cast and the other effects in the frame. Reportedly, Katrina was shocked on hearing such a remark and this statement angered the fans of the female actor. This led to the fans sending hate to the film director and Katrina herself had to break her silence on this matter and clarify that the incident reported in the media portal was not entirely true. Katrina told her fans that after she asked Rohit to reshoot the scene, the team took another shot and she even assured her fans that her friendship with Rohit Shetty was intact.

PEOPLE HAVE PLEDGED SO FAR
When Nawazuddin Siddiqui called Shatrughan Sinha his 'inspiration' to be an actor
Kareena Kapoor Khan reveals her 'most favourite' movie right after Taimur Ali was born
Alaya F debuts on TiktTok with a video that explains her 'quarantine mood'
Esha Gupta's flexibility in yoga photos makes Ali Fazal's 'muscles ache'
Urvashi Rautela to dance with Gopichand in 'Seetimaarr'? Read full details
DO NOT MISS
INDORE, BHOPAL & UJJAIN SEALED
TRUMP LASHES OUT AT WHO
11 INDIANS DIE OF COVID IN US
APRIL 14 DECLARED AS CLOSED HOLIDAY
RAJAPAKSA THANKS PM MODI
US WORRY OVER SAFETY OF AFGHAN SIKH