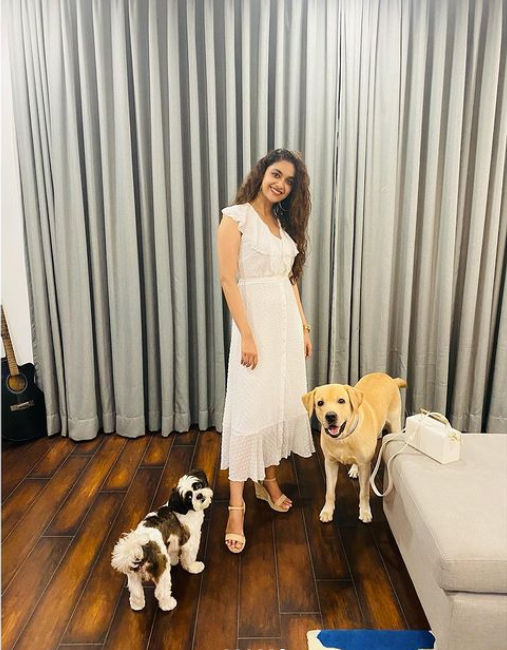 In the above embedded Instagram picture, Keerthy Suresh can be seen posing with her lovely dogs, Arjun and Nyke. The black and white furry Shitzu is Keerthy Suresh's dog, Nyke, while the latter is Nyke's brother, a Labrador Retriever, Arjun. In this Instagram picture, Keerthy Suresh stunned in a plain white dress. The flared outfit was sported with a pair of nude coloured wedges. As seen in the caption, the actor also shared that these were throwback pictures from 2020.

In this Instagram post, Keerthy Suresh shared six pictures of her, from which two features her posing partners, Nyke and Arjun. Here, she stunned in a white netted outfit. The long dress had slit design. Keerthy Suresh accesriosed her outfit of the night with a pair of loop earrings and nude shade wedges. She also sported the attire with a white sling bag. For glam, Keerthy Suresh opted for nude make up look, she applied brown shade lip colour. The actor's curly hair was kept open.

Several fans and followers of Keerthy Suresh commented on her photos. One of the users wrote, "Cuteness overload", while another added, "White beauty Queen". Fans also commented saying they missed Keerthy's dog, Arjun. A fan commented, "Hey Arjun how long I saw you". Another user commented on Keerthy Suresh's photos, "This posing partner too good". Keerthy's post gained more than 500k likes on Instagram. Take a look at some more fans' reactions below. 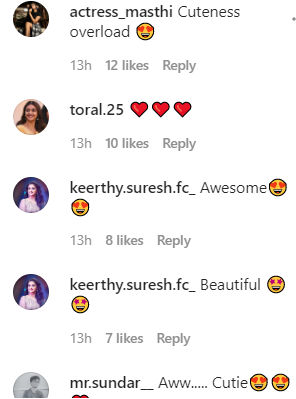