Kiara Advani received an adorable gift from her grandmother on Wednesday morning. Kiara shared a glimpse of the same on her Instagram story. Take a look

On Wednesday morning, Kiara Advani took to Instagram and posted a photo of the gift she received from her grandmother. Kiara's grandmother gifted her a beautiful mat that had a note printed on it. "To my granddaughter, never forget that I love you. Life is filled with hard times and good times. Be brave, be bold, be beautiful," was written on the mat. Kiara got emotional as she shared the photo of the mat on her Instagram story. The actor dropped a teary-eyed emoticon on the post. Take a look.

Kiara receives a gift from her grandmother 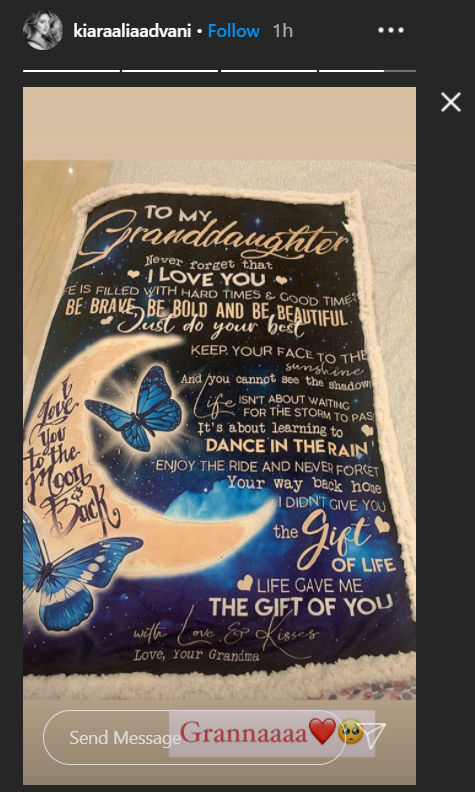 Also Read |On Ashutosh Rana's Birthday, Here Are 10 Adorable Moments Of Him With Wife Renuka Shahane

On the mat, Kiara Advani's grandmother asked her to give her best. "Enjoy the ride and never forget your way back home. I didn't give you the gift of life, but life gave me the gift of you" was further written on it. Kiara wrote, "Grannaaaa" followed by a heart on the post.

On November 10, Kiara Advani posted a series of selfies on Instagram. She wrote, "When love is in the hair". Her photos heaped praises from Dabboo Ratnani, Priyaank K Sharma, and many others. Fans in huge numbers complimented her look. Fans went on to call Kiara beautiful, adorable, cute, and loving.

Love is in the hairrrrðŸ¤ª

On the work front, Kiara was last seen in the movie, Laxmii. The film released on November 9 on the OTT platform, Disney+ Hotstar and opened to mixed reviews from the audience and critics alike. Tusshar Kapoor is the producer of the movie and the horror-comedy also stars Akshay Kumar, Muskaan Khubchandani, and Sharad Kelkar in prominent roles.

The plot of the film revolves around the life of a man who gets possessed by a ghost. In turn, he starts behaving oddly, leaving his family surprised. The film is directed by Raghava Lawrence while Farhad Samji has written the script. Kiara plays the role of Rashmi in the movie.

Apart from this, she will be seen in the upcoming movie, Bhool Bhulaiyaa 2. The movie is a sequel to Vidya Balan starrer of the same name which released in 2007. The sequel stars Pati Patni Aur Woh actor Kartik Aaryan. In March, pictures from the sets of the film in Jaipur surfaced on the internet. However, the shoot was put to a halt due to the lockdown.

WE RECOMMEND
3 weeks ago
Karwa Chauth: Kiara Advani decorates her mother's hands with Mehendi on the occasion
3 weeks ago
Tusshar Kapoor visits Tirupati Balaji temple ahead of the release of Laxmii
2 weeks ago
Shahid Kapoor posts new pics from training session for 'Jersey': 'Never too late to dream'
3 weeks ago
For Kiara Advani & Vijay, it's all about tying the knot this wedding season; watch video
1 month ago
Is Kiara Advani dating someone? Actor finally reveals her relationship status