Kiara Advani shared her favourite meal for breakfast. Take a look at what she has for her breakfast and what's her morning routine like

Bollywood actor Kiara Advani has been in the limelight since Kabir Singh. The film turned out to become one of the highest-grossing movies of 2019. After Kabir Singh, she starred in the movie Good Newwz in the same year. Apart from her movies, Kiara Advani is also known for her fitness and she recently revealed what she eats for breakfast. Let us take a look at Kiara Advani's breakfast meal.

The actor eats an entire bowl of soaked oats in the morning. She revealed that the meal gives her energy to kickstart her day. She posted an Instagram story of the same. Kiara shared a small video where she showed her fans how she makes the oats. She captioned the video "Live for this". Furthermore, the oats not only looked tasty but they were made even healthier by adding sunflower and pumpkin seeds. Apart from oats, Kiara also loves eating a mixture of kale, spinach, and arugula for breakfast. 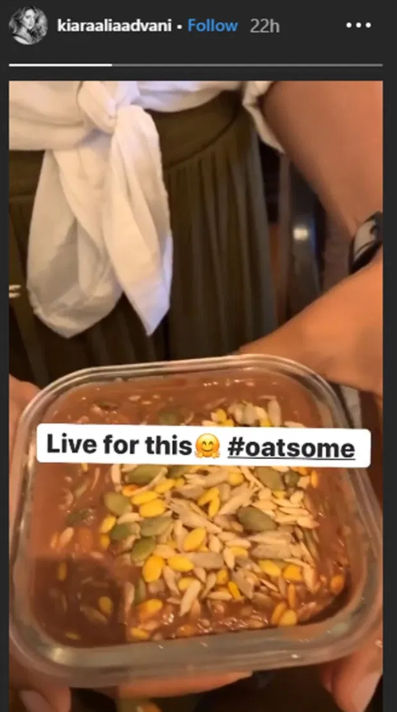 Kiara mentioned that oats are the best thing one can have in the morning. She also said that oats help protect the heart by reducing cholesterol and blood pressure. She swears by oats as the high fibre content also helps with weight loss. Moreover, Kiara mentioned that the additional seed toppings on oats contain more nutrients and make it even more beneficial for the overall health of the body.

Kiara Advani goes to the gym in the morning after breakfast. She said she does not prefer late workouts and that working out after breakfast makes her feel positive and energetic. Take a look at her workout routine here.