Kim Sharma Flaunts Her Freckles As She Shares 'sunkissed' Selfie

Kim Sharma took to her Instagram to share a sunkissed picture of herself. She flaunted her natural freckle while sharing her plans for Wednesday. Check it out.

Kim Sharma recently took to her Instagram to share a picture of her freckles. While most of her fans couldn't stop praising her beauty, she added a funny caption to the picture. Take a look at the picture and know what fans have to say.

Kim Sharma took to her Instagram to share a 'sunkissed' picture of herself where she is flaunting her freckles. This is one of the few times when she actually flaunted her freckles. In the picture, she can be seen taking a selfie near a white curtain while letting the sun rays touch her face. She added a funny caption by writing the name of an old movie and adding it to her Wednesday wish list. She captioned the image as, "Honey, I shrunk the kids. #wednedaywishlist" Check out the picture :

Kim Sharma's Instagram post is filled with her fans praising her for sharing a make-up free picture. One user commented, "Honey, you look like a kid", whereas others left a heart eye emoji. Check out the comments : 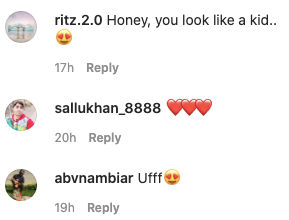 A few days ago, she shared a picture from her vacation in the Maldives. She was sporting a shimmery swimsuit while enjoying a drink. She added a pair of brown sunglasses to her look. She captioned the image as, "Saturday? Ok I'm ready." Check out her picture:

Kim started her career as a model and then became a part of advertisements. In 2000, she made her debut in Bollywood with Mohabbatein. Other than this she was also part of movies that include Tum Se Achcha Kaun Hai (2002), Kehtaa Hai Dil Baar Baar (2002) Khadgam (2002)  Fida (2004), and Padmashree Laloo Prasad Yadav (2005). In 2010, she was a part of the Telugu movie Yagam alongside Navdeep and Bhumika Chawla. Kim also appeared in a TV show for a single episode, titled Carry on Shekhar. She was awarded IIFA Award for Star Debut of the Year – Female.

Fans might not know a trivia about her that she is actually cousin sister of Arjun Rampal, according to IMDB. Another trivia is that she was in a relationship with Jugal Hansraj during the time she was shooting for her debut film. They split up but the reason is not known. In 2011, Kim got married to Kenyan business tycoon Ali Punjani and then were separated after 6 years of marriage.

Also Read: Did you know Harshvardhan Rane and Kim Sharma were once rumoured to be in a relationship?