Kirti Kulhari's Latest Photoshoot Pic Has Got Fans Gushing Over It

Mission Mangal actor Kirti Kulhari took to Instagram on Tuesday, January 12, 2021, to share a picture of her where she looks all glamorous. Take a look

Mission Mangal actor Kirti Kulhari took to Instagram on Tuesday, January 12, 2021, to share a picture of her where she looks all glamorous. Along with the picture, the actor also penned a sweet caption as she went on to describe the pic. On seeing this post, fans went all out to shower love and pen some notes in the comment section.

Taking to her Instagram, Kirti Kulhari shared a picture from her recent photoshoot that is truly unmissable. In the picture, the actor can be seen sitting and striking a simple yet intense pose. Kirti can be seen wearing a blue and pink asymmetrical flowy dress. She completed her look with a one-sided hairdo, well-done brows, bronze highlighter, and nude lips. The actor also went on to share a similar picture in black and white.

Along with the picture, the actor also went on to pen a simple caption describing the same. She wrote, “AND THEN I LOOKED THE OTHER WAY”. Take a look at the post below.

As soon as Kirti Kulhari shared the post online, fans went all out to comment with all things happy and nice. The post also received several likes and comments from netizens. Some of the users went on to comment on how stunning the actor looks in the picture, while some went on to leave sweet comments. One of the users wrote, “you look absolutely stunning”. While the other one wrote, “I truly love this picture. Supremely gorgeous”. Netizens also went on to leave many emojis. Take a look at a few comments below. 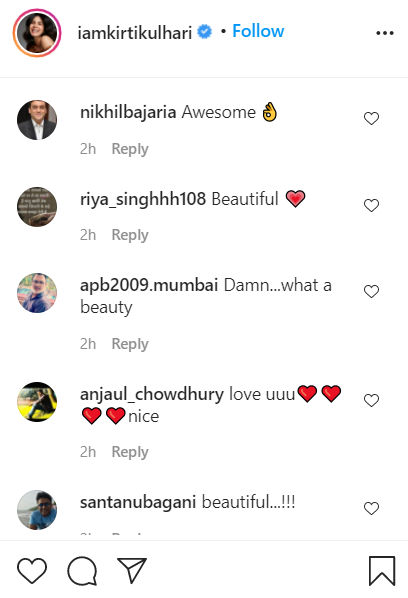 Apart from this picture, the actor often goes on to share several pictures and videos as she gives fans a glimpse of her personal and professional life. Earlier to this post, the actor shared another picture from her photoshoot. Taking to her Instagram handle, Kirti shared a bold image, in which the actor can be seen posing shirtless and sporting a sequin jacket. Sharing the picture, the Pink actor simply added hearts in the caption section. Take a look at Kirti Kulhari's Instagram post below.