Kriti Kharbanda rose to fame after her 2017 film, Shaadi Mein Zaroor Aana. In a recent Q&A session, Kriti replied if a sequel of the film is on its way.

Is Shaadi Mein Zaroor Aana 2 on the cards? Kriti Kharbanda recently had a short Q&A session with her fans on Instagram. When a fan asked her if her 2017 film will have a sequel, Kharbanda’s response seemed to be a positive indication about the same. Find out more details about this story below.

Kriti Kharbanda is slowly carving a place for herself in the Hindi film industry. The Taish actor started out as a model and soon transitioned herself to the big screen. Kriti Kharbanda marked her on-screen debut in the Telugu film, Boni. In 2016, she made her Bollywood debut opposite Emraan Hashmi in Raaz Reboot. But, it was the 2017 film Shaadi Mein Zaroor Aana that marked the turning point in her career. Kriti Kharbanda starred opposite Rajkummar Rao in the film.

Since the release, many fans of the films have been demanding  Shaadi Mein Zaroor Aana 2. Recently, Kriti Kharbanda took some time off her busy schedule and had a small Instagram Q&A session with her fans. During the session, a fan asked Kriti “Shaadi Mein Zaroor Aana 2? Very Excited”. Kriti Kharbanda responded to this question with the a still from the film and also added the caption, “Hopefully Jaldi”. This response can be considered as a positive indication of the film receiving a sequel. But no official confirmation of the same has been announced yet. 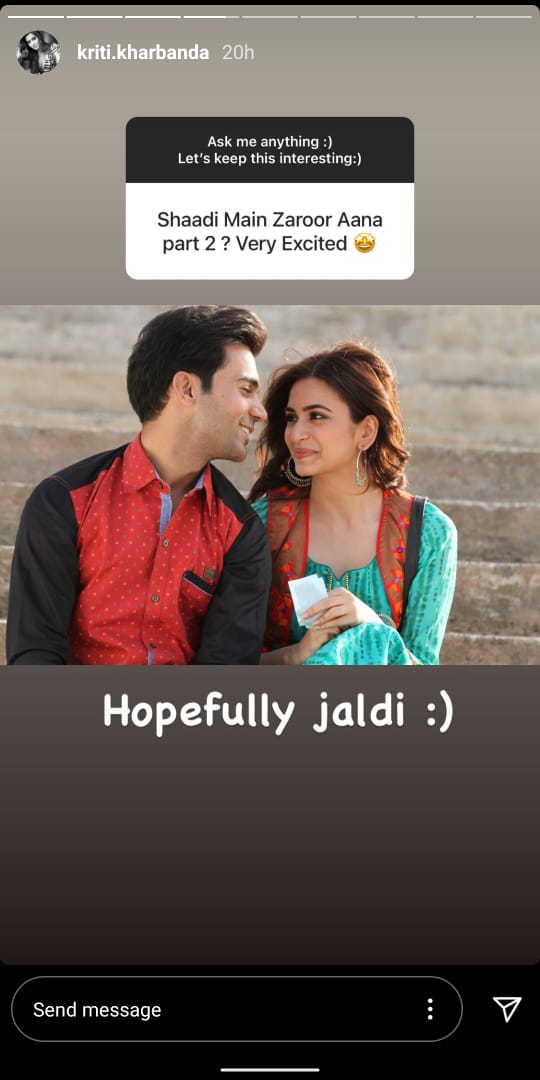 Shaadi Mein Zaroor Aana is also a special film for Kriti Kharbanda. Recently, she celebrated the 3rd anniversary of the film. She shared several BTS pictures from the film and added a heartfelt caption with it. She wrote, “This day, 3 years ago #smza happened, and life changed. A big thank you to the entire team, the audience, the fans, the supporters, and lovers! #3yearsofshaadimeinzarooraana”. Take a look at Kriti Kharbanda’s Instagram post here.

Kriti Kharbanda is currently busy shooting her upcoming film 14 Phere. The Pagalpanti actor took Instagram and shared a picture from the sets of the upcoming film. 14 Phere is a romantic comedy also starring Vikrant Massey. In her Instagram post, Kriti wrote, “Embarking on a journey that promises 2x fun, dulha-dulhan are ready to take #14Phere!”. Take a look at Kriti Kharbanda’s Instagram post here.