Kriti Kharbanda Reveals That Bread Pakora Is Not Just A Dish But 'an Emotion' For Her; See

Recently, Kriti kharbanda revealed that bread pakora is not just a food item but it is an emotion for her. Read ahead to know more about her love for food-

Kriti Kharbanda is an emerging actor in Bollywood. Having done films like Guest In London (2018) and Housefull 4 (2019), Kriti has successfully created a place of her own in this industry. Fans must be unaware of the fact that she is also a big-time foodie. Recently, Kriti Kharbanda revealed that bread pakora is not just a food item but it is an emotion for her. Read ahead to know more:

Kriti Kharbanda reveals that bread pakora is an emotion for her

Kriti Kharbanda and Pulkit Samrat have been making headlines lately about their adorable love story. The two actors are having the time of their lives during this lockdown period, as the two are quarantined together. This global pandemic has surely turned Kriti and Pulkit into chefs.

Almost every day, the couple is spotted trying their hands with cooking and making dishes that surely look mouthwatering. The lovebirds have been impressing their fans a lot by making dishes like Amritsari fish, cakes, kulfis, and baked breads.

Recently, Kriti Kharbanda took to her Instagram stories to post a picture of homecooked bread pakoras. She seems to love the dish as she captioned the picture, “Coz bread pakora is an emotion”. 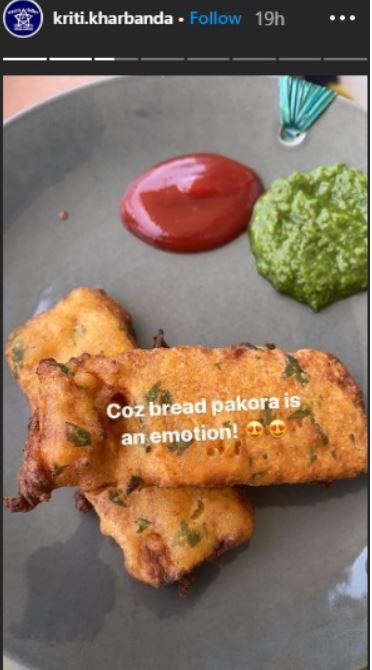 Kriti Kharbanda seems to have excelled in the art of cooking, during this lockdown period. The actor is often seen posting pictures of the dishes made by her. The fans never fail to pour all their love to this new side of her that they have been witnessing. They shower the pictures with very high number of likes and comments full of praises.

Kriti Kharbanda made her Bollywood debut with Vikram Bhatt’s Raaz: Reboot (2016). She was last seen on the big-screen in Aneez Bazmi’s Pagalpanti (2019). She will next be seen in Taish, that is scheduled to release in 2021. However, no confirmation of the date has been given due to the global pandemic.