Kriti Kharbanda shared a cute selfie she took with Pulkit Samrat on Instagram where she wished the star on his birthday, calling him 'my birthday boy'

Pulkit Samrat and Kriti Kharbanda who are painting the town red with their lovey-dovey posts, once again shared some adorable pictures. As Pulkit turned a year older on December 29, Kriti took to her Instagram handle and shared a cute selfie.

Calling Pulkit 'my birthday boy', Kriti also shared a picture of him with the cake. While fans await Kriti's official birthday post for her boyfriend, take a look at the below picture the Pagalpanti actress shared on her Insta story. 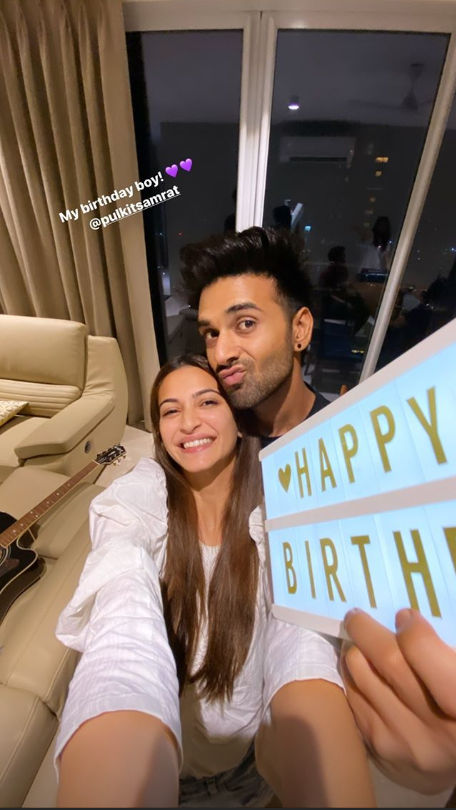 Recently, a pic of them in traditional wear had also sent their fans swooning. Fans asked the couple if they were planning to tie the knot. Pulkit and Kriti recently wrapped the movie 'Taish'. The movie also stars Jim Sarbh and Harshvardhan Rane. The movie is being directed by Bejoy Nambiar.

Pulkit and Kriti had first worked together in the movie 'Veere Ki Wedding'. The movie had released in 2018. That is their only movie as a lead pair, since the other movies were multi-starrers.

Pulkit and Kriti were paired opposite each other in Anees Bazmee's Pagalpanti. The director also spoke about their chemistry and said, "mujhe feel ho raha tha inki thodi dosti jyada ho rahi hai', baakiyo ke bhi dosti hai but inki jyada hai' (friendship between these two is something else and not just friendship)."

The director added, "But Pulkit and Kriti being in love turned out beneficial for me as they are paired opposite to each other in the film and there were scenes where they need to hug and kiss each other. So that came naturally to them. Their off-screen love reflected in their characters and that benefited the film."