Kriti Sanon and Varun Dhawan recently took to Instagram to wish the Housefull 4 director Farhad Samji on his 46th birthday. Check out their wishes below

Housefull 4 director Farhad Samji turned 46 today, i.e May 6, 2020. Therefore, birthday wishes from Bollywood actors and director's fans from across the country started pouring in on social media. Joining the bandwagon is the Dilwale couple and co-stars Kriti Sanon and Varun Dhawan, who wished the filmmaker on his birthday with a heartfelt post on social media.

Kriti Sanon recently starred in the fourth sequel of the blockbuster Housefull series, titled Housefull 4, which was helmed by Farhad Samji. On May 6, 2020, the filmmaker turned 46, and to make his birthday special, Kriti Sanon decided to pen down an emotional birthday wish for Samji by sharing a streak of pictures from the sets of Housefull 4 on Instagram. Check out her post below:

Kriti Sanon's Birthday wish read, "Happyyy Happyyy Birthday Sirrjjeee!! @farhadsamji wish you a HouseFull of happiness! And may this year bring as much laughter in your life, as you bring in our films and our hearts! We would have probably started Bachchan Pandey today! Khair... jab bhi we do, its gonna be a memorable journey for sure! Lots of love! "

On the other hand, the Kalank actor Varun Dhawan too took to Instagram to wish Samji on his birthday by sharing a BTS photograph from the sets on Coolie No.1. In the candid photograph shared by Dhawan, he is seen having a conversation with Farhad Samji and his elder brother Rohit Dhawan. Check out Dhawan's post below:

Varun Dhawan's birthday wish for Samji read, "Happy Birthday@farhadsamji bhai u have always been by my side like a rock. Your contribution has always been immeasurable can't wait for the world to Kunwar and Raju, Aapka Student" 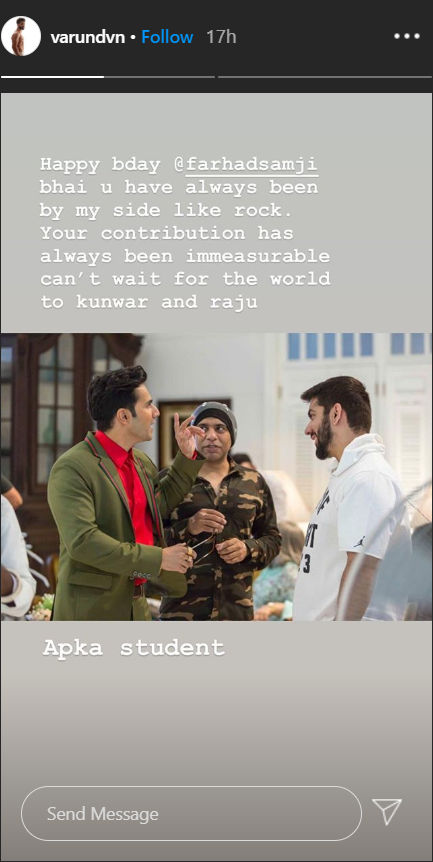 On the work front, Kriti Sanon will next be seen in the official Hindi remake of the Marathi film, 'Mala Aai Vahhaychy!' titled 'Mimi'. The remake of the National-Award winning film stars Sanon as a surrogate mother and is slated to release in July 2020. On the other hand, Varun Dhawan will be seen sharing the screen space with Sara Ali Khan for the first time in the remake of Coolie No. 1 by the same title.