In her latest Instagram story update, Kriti Sanon has tagged herself as 'Chulbuli Pandey'. She can be seen in a traffic police avatar for a commercial shoot

Kriti Sanon's latest Instagram story update with her posing as a traffic cop has gone viral as she has tagged herself as 'Chulbuli Pandey'. She can be seen in a cop uniform with sunglasses and winking at the camera while sitting on the chair. Fans have loved the photo and now anticipate that the Luka Chhupi actor will soon be seen in a film with the original Chulbul Pandey, Salman Khan. 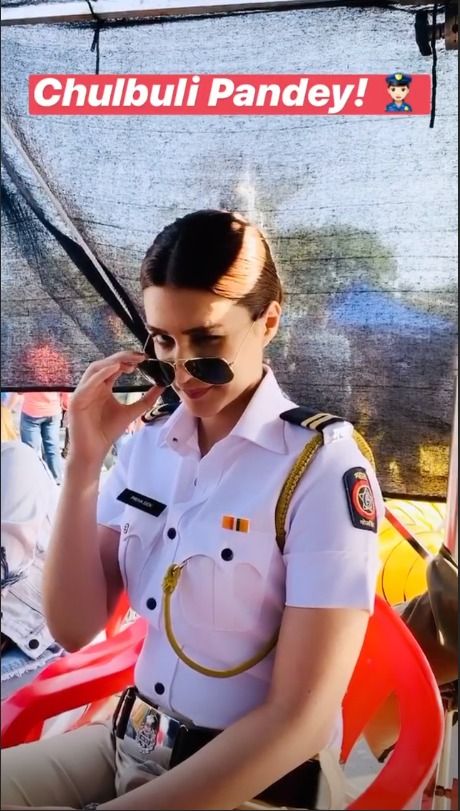 News of Kriti Sanon being signed for Salman Khan's Kabhi Eid Kabhi Diwali has been doing the rounds since the announcement of the film. Sanon's latest update adds to the speculation of the actor being cast in the Farhad Samji directorial which is scheduled to release on Eid 2021. There has been no official confirmation of the same by the makers of the film.

Meanwhile, Kriti Sanon will be seen next in Laxman Utekar's Mimi which is reportedly based on the Marathi film Mala Aai Vhhaychy! in which the actor will be essaying the role of a surrogate mother.

The original film was directed by Samruddhi Porey and had won the National Award for Best Marathi film in 2011. As per reports, Kriti Sanon will gain 15 kgs for her role in Mimi which will mark her first film as a solo actor with artists like Pankaj Tripathi and Sai Tamhankar in pivotal roles.

Post Mimi, the actor will be a part of Bachchan Pandey opposite her Housefull 4 co-star Akshay Kumar. The film is the Hindi remake of the Tamil action film Veeram and will be directed by Farhad Samji. This film will mark the trio's second collaboration after Housefull 4.