Kriti Sanon is an avid social media user. The actor goes on to share stunning pictures from her personal and professional life. The actor often is seen sharing pictures wearing stunning outfits. The actor is also lauded by the fashion police and her outfits go on to becoming a trend among her fans. Kriti Sanon recently shared a fabulous post which is completely unmissable.

Kriti Sanon recently took to Instagram to share a picture of herself striking a stunning pose. She can be seen sporting an all-black leather outfit with black high heels. She also opted for a messy hairdo with glowy makeup and hand accessories.

Fans went gaga seeing this picture. They went on to comment on all things nice. One of the fans wrote “Those sharp looks”. While the other wrote, “You are the best. On fire always.” Check out a few more comments from fans. 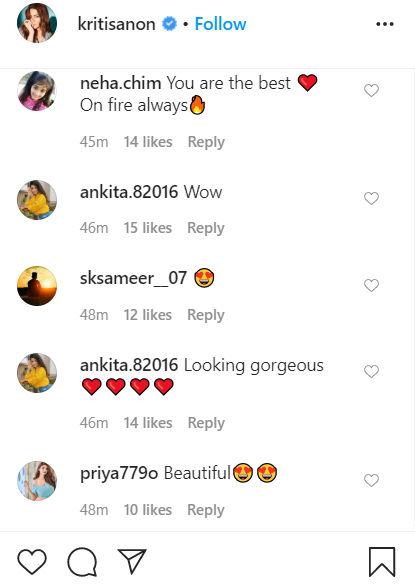 Kriti Sanon will next be seen in Ahmed Khan’s Heropanti 2 alongside Tiger Shroff. As per reports, the film is said to be a remake of the 2012 Korean film titled A Company Man. The original film, Heropanti also starred Kriti Sanon and Tiger Shroff in lead roles. The film is reported to release on July 16, 2021.

Also read | Kriti Sanon's First Poem Was All About 'teenage Romance'; Says, "it Was Childish"