Amid the filming of 'Laal Singh Chaddha', Aamir Khan's look in Army uniform leaked online. Netizens went gaga over it, calling him 'handsome' and 'young.'

With a movie that is set to release after a debacle (Thugs of Hindostan) and two years, it seems Aamir Khan is leaving no stone unturned for his next Laal Singh Chaddha. Be it taking up a Hollywood classic, producing the film, or ensuring that he gets a solo release by requesting Akshay Kumar to shift his film, the actor looks keen to bounce back. Another aspect of his work for the film, has been the various looks he’s been flaunting.

His appearances as a Sikh man, and another in a heavily bearded avatar had gone viral upon its release. Now, another look of the Lagaan star has surfaced on social media and made his fans excited. Aamir was seen dressed in an Army uniform from the set. The uniform bears the name ‘Laal Singh Chaddha’ as the ‘Perfectionist’ is seen with glasses, while sporting a clean-shaven look with short hair, as compared to his earlier appearance.

His fans went gaga over the look, sharing how much they were ‘thrilled.’ They termed it ‘mass look in army dress’ and called him ‘handsome’ and ‘young.’ 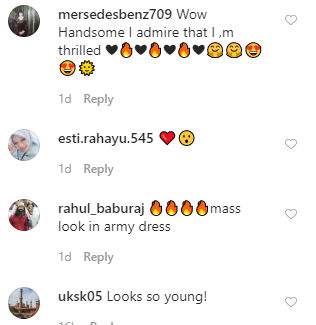 For the unversed, the character Forrest Gump in the 1994 Tom Hanks-starrer also is shown joining the US Army for a brief period.

Meanwhile, Aamir had recently shared the first look of his leading lady Kareena Kapoor on the occasion of Valentine’s Day. Sharing an intense verse, he had written how he wished to romance his 3 Idiots co-star in every film.  Laal Singh Chaddha has been directed by Aamir’s former manager and Secret Superstar fame Advait Chandan. The movie also stars Mona Singh, among others. The film releases on Christmas.

PEOPLE HAVE PLEDGED SO FAR
Priyanka Chopra's 'The Sky Is Pink' and other films that featured strong mothers
Abhishek Bachchan misses Jaya Bachchan on her b'day while she stuck in Delhi amid lockdown
Sonam Kapoor pens special note on Swara Bhasker's birthday, says 'never stop being you'
Sonam Kapoor or Taapsee Pannu: Who wore the white pantsuit better?
Why does Nawazuddin Siddiqui cut two cakes on his birthday? Find out
DO NOT MISS
INDORE, BHOPAL & UJJAIN SEALED
TRUMP LASHES OUT AT WHO
11 INDIANS DIE OF COVID IN US
APRIL 14 DECLARED AS CLOSED HOLIDAY
RAJAPAKSA THANKS PM MODI
US WORRY OVER SAFETY OF AFGHAN SIKH