Madhuri Dixit is known to be one of the prominent faces of Bollywood. Though the actor is not much seen on-screen now, she still holds an acclaimed position in Bollywood. The actor recently launched the trailer of the movie Guns of Banaras. The movie features Karann Nath in the lead role along with Ganesh.

The trailer launch of Karann Nath was scheduled today. At the launch event, Madhuri Dixit expressed her love for the action thriller. The actor said that because of her image in Bollywood, it is always interpreted that she would be a fan of mushier and romantic movies rather than action thrillers, however, it’s not true in her case. She also exclaimed that she thoroughly enjoyed doing action scenes herself in the movie Gulab Gang. 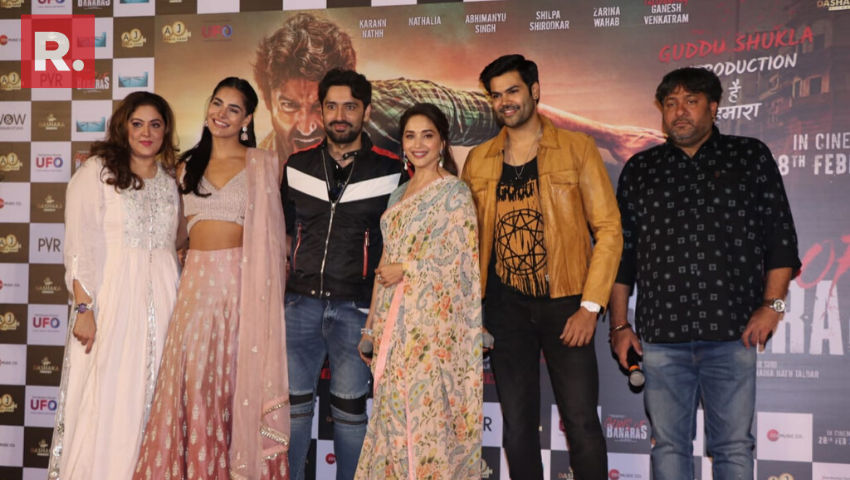 Guns of Banaras is an action thriller starring Karan and Ganesh in lead roles. Helmed by Shekhhar Suri, the movie depicts the two leads performing action sequences in the trailer. They have done this under the guidance of the action director Sham Kaushal.

Guns of Banaras is an official remake of Dhanush’s blockbuster Polladhavan. In the movie, Karann will be seen portraying the role of Guddu Shukla who is an angry young man from Varanasi. The whole film has been shot at different locations of Banaras. The action drama also stars Nathalia Kaur, Abhimanyu Singh, Ganesh Venkatram, Shilpa Shirodkar, Salim Baig and others.

Guns of Banaras is bankrolled by DASHAKA FILMS and AJ MEDIA. The music of the movie is given by Sohail Sen. The movie is slated to hit the theatres on February 28, 2020