Maheep Kapoor, the wife of Sanjay Kapoor recently took to her Instagram handle and posted some sizzling pictures of herself that depicted her mood. Take a look.

Maheep Kapoor is an Indian jewellery designer and entrepreneur, she is also the wife of a well-known Bollywood actor and producer — Sanjay Kapoor. As Maheep Kapoor has been gaining more recognition due to her latest Netflix appearance, her social media has also been gaining popularity with an increase in her fan following. As she recently posted a series of pictures on social media, all her fans loved them and complimented her on how lovely she looked. Let’s have a look at Maheep Kapoor’s Instagram and see how her fans showered love and appreciation on her post.

Maheep Kapoor recently took to her Instagram handle and added a series of her selfies in which she can be seen slaying the beach look with a pair of cool sunglasses and a black coloured cap. She can also be seen wearing a multi-coloured swimwear with a stunning brown coloured lipstick shade. One of the interesting things that was spotted in her pictures was the necklace she was wearing. In the necklace, she had the names of her kids and herself carved out beautifully. It included the names of her children Shanaya Kapoor and Jahaan Kapoor along with her own name.. As she was relaxing on the beach, she managed to click these stunning pictures of herself that made all her fans drool over her beauty.

All her fans couldn’t help but drop several comments under the post stating how cool she looked in these pictures. Many of the fans took to Maheep Kapoor’s Instagram post to compliment her as to how she looked so young and fierce. Many of them also spotted her necklace and mentioned how lovely it was and some of them even dropped her a comment asking from where did she buy it. Have a look at Maheep Kapoor's photos and see how the fans reacted to her sizzling selfies. 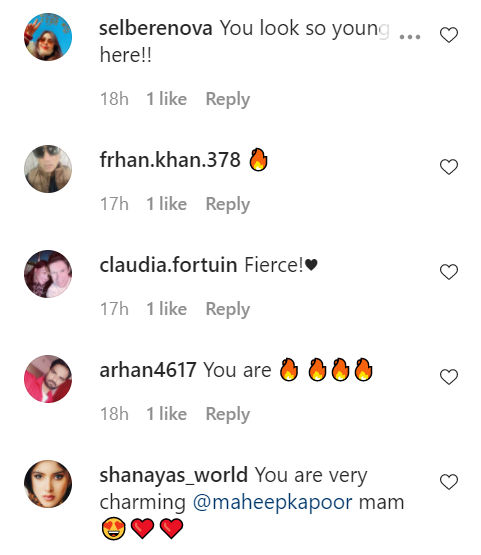 As Maheep Kapoor celebrated this New Year with a blast, she posted a picture of her gang with whom she partied. The group involved several celebrity artists as well who joined Maheep Kapoor on this New Year. In the latest photo she shared, celebrities such as Manish Malhotra, Nushrratt Bharuccha, Karishma Tanna, Sanjay Kapoor and many others were seen in their sizzling party outfits welcoming the New Year together.