The death of make-up artist Subbu left Anushka Sharma heartbroken. She mourned with an emotional note, calling him a 'beautiful soul' and praised his work.

Anushka Sharma mourned the death of her make-up artist Subbu. The actor paid a heartfelt tribute to him, praising him for the person that he was and his work. She called him a ‘beautiful soul’ and a ‘mestro’, who made her look beautiful every time. The Ae Dil Hai Mushkil star added that he will remembered as not just as one of the ‘most loving and respected make-up artists’ in the country, but also for his ‘beautiful work’ and the lives that he touched.

Taking to Instagram, Anushka Sharma shared numerous adorable pictures with Subbu, one where they are looking into the mirror after make-up, another where is applying make-up on her, another where they are sharing a light-hearted moment and looking at each other. The actor captioned the post, “He was kind, he was humble, he was gentle and he was brilliant . A maestro, as I always called him. Subbu will always remain one of the most loved and respected makeup artists in the country. He made me look beautiful every time he touched my face with his exceptional skills. And will be remembered for all the beautiful work he has left behind and all the lives he has touched. A wonderful son and brother and a beautiful soul has left us today. May you rest in peace Subbu 🙏💜 .”

On her Instagram stories, the Rab Ne Bana Di Jodi star wrote another note, “One of the sweetest, kindest, gentlest beings has left us today. He was so talented and such a delight to work with. With him around there was no drama! Only and only exceptional working environment and the result was that he made me look and feel so so beautiful each time he did my make-up. Subbu you will be missed so so much!’ And sharing pictures, she wrote, “Rest in peace darling Subbu.’ 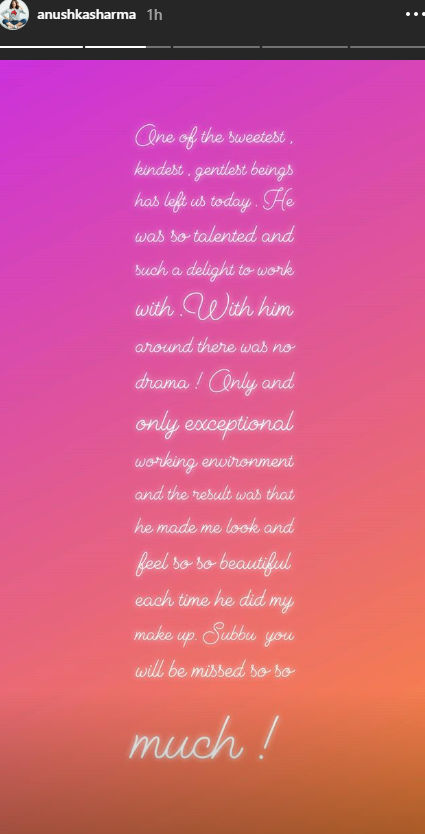 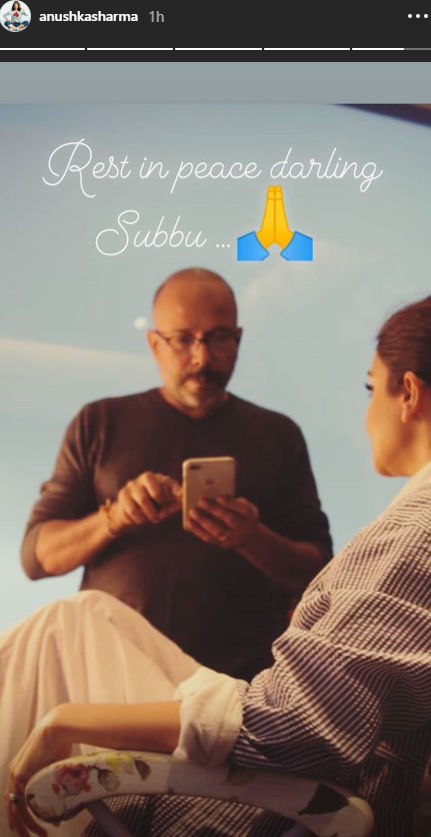 As per reports, Subbu had also done the make-up for Anushka Sharma at her Mumbai reception. The actor got married to Indian cricket captain Virat Kohli in December 2017. Apart from Anushka Sharma, other actors who Subbu worked with includes Kareena Kapoor Khan and Rani Mukerji.