Malang: Maharashtra Police Uses Anil Kapoor's Video To Make A Point, His Reply Is A Winner

Anil Kapoor replied to Maharashtra Police's tweet who used his recent film, Malang's trailer to spread awareness and make a point in front of the citizens.

Anil Kapoor is currently gearing up for the release of his film, Malang alongside Disha Patani and Aditya Roy Kapur. Just yesterday, the makers unveiled the trailer, and apart from netizens, the Maharashtra Police's Twitter handle seems to have caught the Malang fever too. Using a clip from the trailer to make a point, Maharashtra Police wrote, 'Aur Jaan Bachana Hamari Duty', and in response, Anil Kapoor tweeted saying that actors including himself are just 'reel life heroes', and the country's police is the one who is actual 'real-life heroes'.

WATCH: Anil Kapoor Reveals The Role He Wanted To Play In His Upcoming Film 'Malang' 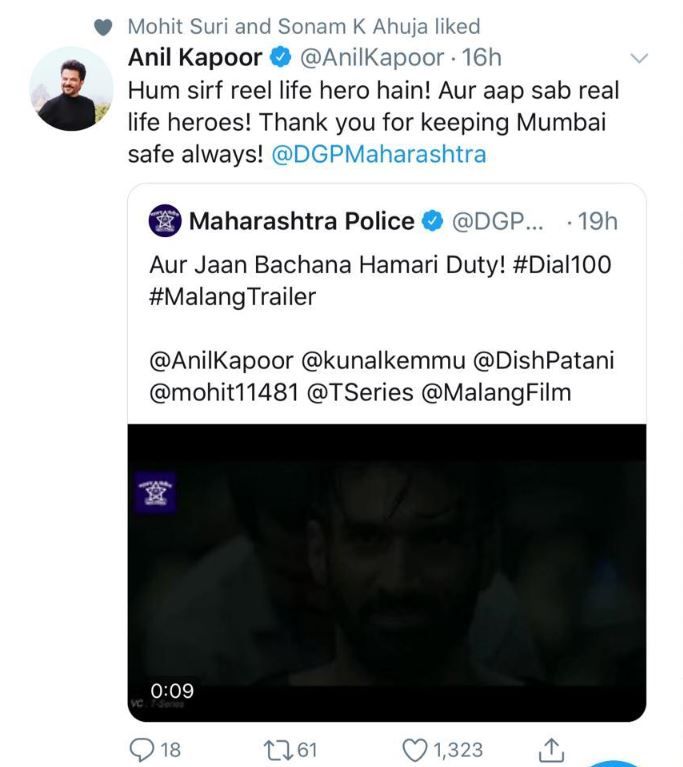 Meanwhile, the trailer of Mohit Suri's Malang promises a thrilling ride from the romantic story between the characters, played by Aditya Roy Kapur and Disha Patani, into the nefarious world of narcotics and murders. The entry of the antagonist played by veteran actor Anil Kapoor gives the narrative a shocking turn and unleashes a world of corruption, revenge motives and more. 'Jaan lena' (killing or slaying) becomes the need of the hour as the trailer ends with each character's drive and reason to kill in this evidently high adrenaline action thriller. It was one of the highest anticipated films of the year given the multi-starrer cast.

READ: Anil Kapoor Reveals He Wanted To Play THIS Role In The Upcoming Film 'Malang'

Apart from the dialogues in the trailer, what stays with the viewers is the background score. The music of the track is captivating and adds to the plot of the trailer perfectly. Earlier on Monday, the makers and the cast of Malang shared the latest poster of the film through their social media with the caption “Sab Se Juda and Khud me Malang” adding fuel to the anticipation for the film.

Watch the trailer below-

READ: Anil Kapoor's Top Dapper Looks That Will Make You Want To Refresh Your Wardrobe