Mallika Sherawat shared pics with Anil Kapoor & Nana Patekar. She recalled the 'blast' she had while shooting for 'Welcome'. Check out what she asked fans.

On Thursday morning, Mallika Sherawat took a stroll down the memory lane and posted throwback pictures with her Welcome co-stars Anil Kapoor and Nana Patekar. Calling it her "Throwback Thursday" post, Mallika recalled the blast she had while shooting for the film. The first two pictures are her stills with Anil Kapoor, from the songs of Welcome. Whereas, the last picture is a BTS photo, in which the trio, Mallika, Anil and Nana Patekar, is caught in a candid moment.

Sharing the post, Mallika Sherawat wrote, "Had a blast shooting for WELCOME!". The actor also shared that she misses shooting for films. Furthermore, Sherawat asked, "How many times have you guys watched it?". Soon, netizens gushed to reply to her questions. An amused fan replied, "Maybe 100 times." Whereas, a bunch of her followers also recalled Majnu Bhai and Ishika's rib-tickling on-screen chemistry. "Every Sunday of my life, no one can replace the pleasure of watching Welcome again & again," a fan wrote in the comments section. 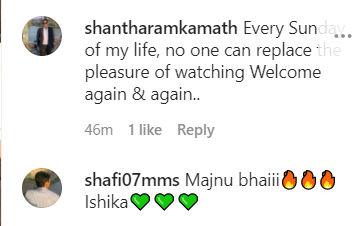 Also Read | Jim Sarbh's Massive Net Worth Will Make You 'Flip'; Here's How Well-off The Actor Is

Welcome movie is helmed by Anees Bazmee, who has also directed comedy-dramas like Pagalpanti, Singh Is Kinng and many more. The movie features an ensemble cast of Akshay Kumar, Anil Kapoor, Katrina Kaif, Mallika Sherawat, Nana Patekar, Paresh Rawal, Asrani and also late actor Feroz Khan, among others. Even today, the film quite often airs on television and remains fresh in the hearts of fans. The songs from Welcome titled Kiya Kiya, Hoth Rasiley, Uncha Lamba Kad and others have hit a staggering number of views online.

Also Read | Mallika Sherawat enjoys a jog at Bandra; fans fume as she is seen without a mask

Even though Mallika Sherawat has been away from the celluloid for quite some time now, the actor's Instagram posts garner a lot of attention. She keeps sharing many videos of herself in which she is seen performing yoga at home. The Murder actor recently shared an adorable picture of herself. In the pic, she was all busy looking at the surroundings. "Look for something positive in each day, even if some days you have to look harder," wrote Mallika.