Actor Divyenndu who impressed all with his impeccable acting and stellar performance in the series recently announced his next project Mere Desh Ki Dharti. 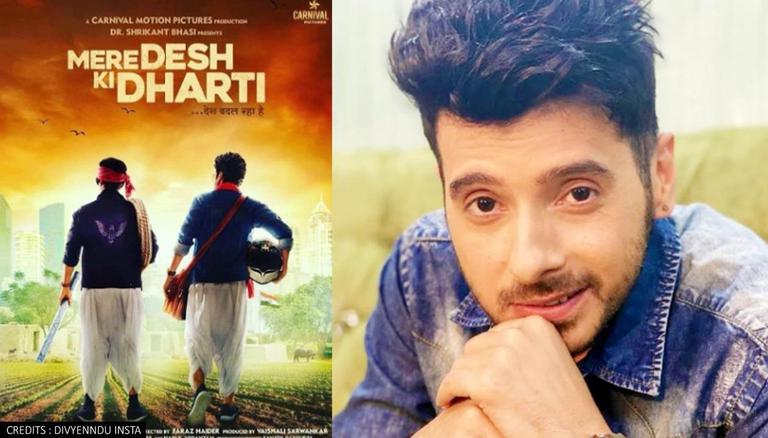 Mirzapur fame actor Divyenndu who impressed all with his impeccable acting skills and stellar performance in the series recently announced his next project Mere Desh Ki Dharti. Apart from Divyenndu, the film will star Anupriya Goenka and Anant Vidhaat in pivotal roles. The film will be directed by Faraz Hiader and produced by Vaishali Sarwankar. Apart from sharing the exciting news, the actor even shared the motion poster of the film that seems to speak about the farmers and their situation in the country.

In the motion poster, the actor can be seen donning an indo-western look where he can be seen wearing a shirt with a towel wrapped around his shoulders. Apart from this, he can be seen holding a stick wrapped around a small bag as he walks on the farm. The film is touted to be a revolutionary one that will showcase the problems of the farmers and talk about their upliftment, the actor captioned the post and wrote, “Desh ke kisano ko milegi disha nayi, phir badlegi desh ki hawa!
Mera desh badal raha hai, aap bhi shamil ho jayein is journey mein humare sath. Happy Republic Day. Jai Hind. Jai Jawaan Jai Kissan.”

Read: Chunky Panday Shares BTS Pictures From The Sets Of His New Film With Mirzapur's Divyenndu

According to Bollywood Bubble, the film is a satirical and comic take on the contemporary situation where the rural and urban divide comes to the fore. The story of the film revolves around two engineers and their transforming journey in life. It is a patriotic-family film that involves a concerning social subject that is communicated across the community in a very subtle manner. The team of ‘Mere Desh Ki Dharti’ is currently in the process of post-production activities. Earlier, the film was slated to hit the screen on August 14, 2020, but owing to the ongoing pandemic and the theatres being widely shut, the film will now release in 2021.
Read: Divyenndu Sharma Speaks About 'Bicchoo Ka Khel'; Says, "It Has Got A Cult Feel To It"

WE RECOMMEND
Chunky Panday shares BTS pictures from the sets of his new film with Mirzapur's Divyenndu
Kavita Krishnamurti was not the first choice for 'Hawa Hawai'? Read details
Divyenndu Sharma speaks about 'Bicchoo Ka Khel'; says, "It has got a cult feel to it"
'Mere Desh Ki Dharti' slated to release on 14th August 2020 in theatres
Divyenndu Sharma promotes 'Bicchoo Ka Khel' in Lucknow; speaks highly of its delicacies