Recently, Mira Kapoor shared a quirky quote that she found on the internet and tagged Shahid Kapoor to let him know that their daughter is going to be sassy

On Friday, Bollywood actor Shahid Kapoor’s wife Mira Kapoor posted a quote on her Instagram stories to put across a message about their daughter, Misha Kapoor. To grab the attention of Shahid Kapoor on the same she also tagged him in the story. Read on to know what Mira Kapoor would love to hear from Shahid about Misha Kapoor's upbringing.

READ | #FlashbackFriday: When Mira Kapoor Made The 'puppy' Comment And Shahid Kapoor Defended Her

Mira Kapoor shared a quote she found on the internet. The post read, “One day I’ll have a sassy, know-it-all daughter and my husband will say 'she got that from you' and I can’t wait.” She also added a GIF of a cat and tagged Shahid Kapoor in the story session. Scroll down to take a look at it. 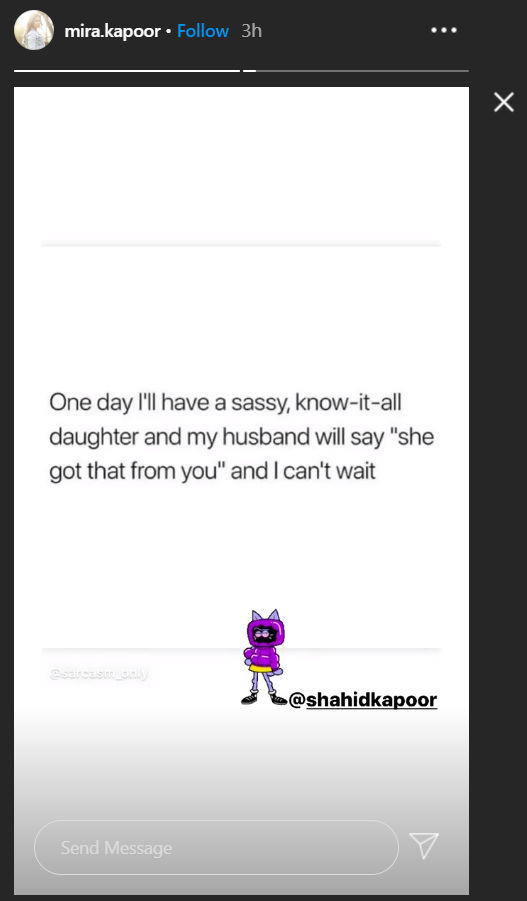 Well, it seems like Misha Kapoor has owned the story session of Mira Kapoor as she often receives love from her mother.  A few days back, Mira shared a picture of a piece of embroidery that had one heart inside another. In the caption, she confirmed that her three-year-old munchkin helped her in making the piece. The caption of her story session read, "Big love with my little love. With a hand drawn pattern and help on the turns, little hands made the heart with a lot of excitement and filled with a whole lot of love!".

On the other side, Shahid Kapoor had earlier revealed the two women boss him around at home. He was asked to name one person who always bosses around him no matter what the situation was, when he appeared on Neha Dhupia's talk-show No Filter Neha. To which he replied that they both are Virgos, they are women and they know that.

What's next in Shahid's kitty?

Talking about the professional front, Shahid Kapoor was last seen in 2019's one of the highest-grossing films, Kabir Singh, opposite Kiara Advani. Though the film received a mixed response, it managed to earn huge numbers at the Box Office. Shahid next has Jersey, which is a Hindi remake of a Telugu-language sports-drama. He will be seen essaying the character of a cricketer in the film.

PEOPLE HAVE PLEDGED SO FAR
LATEST NEWS
View all
1 hour ago
Richa chadha or katrina kaif: who wore the all-yellow outfit better?
40 mins ago
Malaika arora's guide to pose and look like a complete stunner; see pics
12 mins ago
Amir siddiqui won't use his reactivated tiktok account until his brother faizal can too
12 mins ago
Arjun kapoor sheds some light on his mother mona kapoor's wise words
55 mins ago
Shraddha kapoor praises rajasthani villagers for helping animals, lauds their empathy