Shahid Kapoor's Wife Mira Rajput Sweats It Out At The Gym With 40 Kg Squats, See Post

Mira Rajput Kapoor often gives a glimpse of her workouts. Read to know about her giving a tough competition to her hubby Shahid Kapoor in her latest video.

Mira Rajput Kapoor recently appeared in an ad that wooed many. Of late, she has been seen spending quite a lot of time at her gym. Now in a recent story, Mira is seen practising squats by lifting a heavyweight of around 40 kg, giving a tough competition to her husband and actor Shahid Kapoor. Read to know more.

Shahid Kapoor is among the fittest actors in the industry. He spends a lot of his time in the gym and keeps a steady workout routine as per reports. Now his wife, Mira Rajput Kapoor is also seen giving major fitness goals to many. Mira shared videos on her Instagram stories from her gym sessions. '40kg squats on the menu for Mira Rajput. Perfecting the technique step by step but your progress has been phenomenal. You’re gonna be squatting 60 kgs reps very soon', the story read. 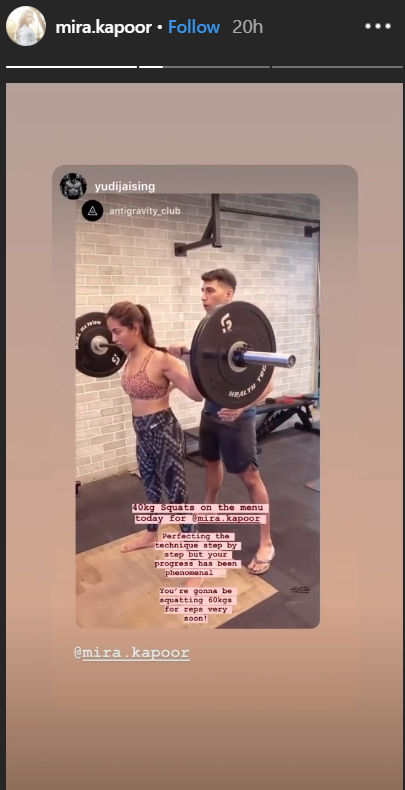 Earlier, Mira Rajput Kapoor’s gym gave a glimspe of her training in a video. They posted it on their official social media handle. Mira was seen doing squats, lifting small weights, crunches and other exercises. See the video below.

Also Read | Shahid Kapoor To Reunite With Alia Bhatt After 'Udta Punjab' In A Patriotic Film?

Mira Rajput Kapoor has 2 million+ followers on Instagram. She has been quite active on the platform as she has uploaded several pictures of her hubby Shahid and her children. She has not uploaded many of her workout pictures, but still, the very few that she has put up is worth your attention.

Shahid Kapoor was recently injured during the shoot of his upcoming film Jersey. It is the Hindi remake of a Telugu film with the same name. It is a sports drama film directed by Gowtham Tinnanuri. The movie also stars Mrunal Thakur and Pankaj Kapoor. The story is said to be about a thirty-six years old cricketer who stopped his cricketing career ten years ago, aiming to play for the Indian team. Jersey is scheduled to release in the latter half of 2020.