Through her Instagram story update on Thursday, Shahid Kapoor's wife Mira Rajput revealed that she felt sad after watching the series finale of 'Schitt's Creek'

Mira Rajput on Instagram shared her thoughts after watching all the seasons of the popular Canadian sitcom Schitt's Creek. She called the show "a gem" and heaped praises for its "brilliant writing, characterizations, setups, costumes and screenplay" and added that the crowning glory of the show is its message. Mira also tagged the show's lead actor Dan Levy - who plays the role of David Rose and is also the show's co-creator, writer, director, producer - and called him a genius for creating the show. 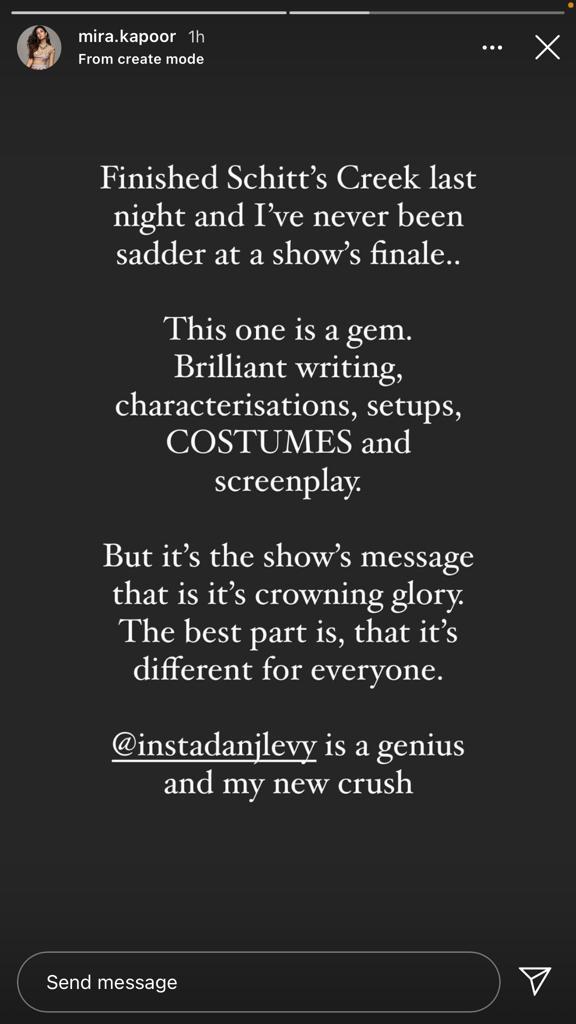 Speaking about the major sweep to an international magazine, Daniel Levy had said that the wins felt very strange, in a nutshell. He was of the stance that it was an unbelievable way to end their series, Schitt's Creek. He stated that the team was thrilled and they could not have wished for a better conclusion than this.

Daniel Levy also threw some light on the possibility of Schitt's Creek being made into a film. He did not completely ridicule the chances of a film and said that if such an idea pops up in his head, it has to be exceptional in every way. He believed this is a great way to say goodbye to the audience. He also added that he has his fingers crossed as he has been hoping for a good idea to pop up in his mind at some point in the future.

WE RECOMMEND
4 weeks ago
'Schitt's Creek' filming locations: Here are prime shooting locations of the series
2 weeks ago
Mira Rajput enjoys her evening with some 'chai and biscoot'; Take a look
1 month ago
Mira Rajput asks fans about the pre-corona era, here is what fans say
2 weeks ago
When Shahid Kapoor spoke about first thing he ever asked his wife Mira Rajput
1 month ago
Schitt's Creek cast's net worth proves life is a bed of roses for the Rose family