Kareena Kapoor Khan took to Instagram on Thursday, February 04, 2021, to share a boomerang of her that is truly unmissable. Take a look.

Veere Di Wedding actor Kareena Kapoor Khan took to Instagram on Thursday, February 04, 2021, to share a boomerang of her that is truly unmissable. Along with the video, the actor also penned a note revealing details about the same. On seeing this post, fans went all out to comment on all things nice as they could not stop gushing over the video.

Taking to her Instagram handle, Kareena Kapoor Khan shared a video where she went on to show off her baby bump. In the boomerang video, the actor can be seen striking a pose as she looks at her baby bump and back at the camera. One can also notice how happy and excited Kareena looks in the post. The actor can be seen donning a sky blue gown with bishop sleeves and embroidery work. She also opted for a middle parting hairdo, well-done brows, kohled eyes, and nude lips.

Along with the video, the actor also penned a sweet note revealing details about the shoot. She wrote, “9 months and going strong ðŸ’¯ðŸ’ªðŸ» #NotGivingUp #FunTimes #BTS”. By the looks of the post, seems like the actor’s date is not too far. Take a look at Kareena Kapoor Khan's Instagram post below.

As soon as Kareena Kapoor Khan shared the post online, fans went all out to comment on all things happy and nice. Some of the users revealed how elated they are on the news, while some could not stop going gaga over the post. One of the users wrote, “my heart can’t handle so much”. The other one wrote, “yeas mama. Eagerly waiting”. Check out a few more comments below. 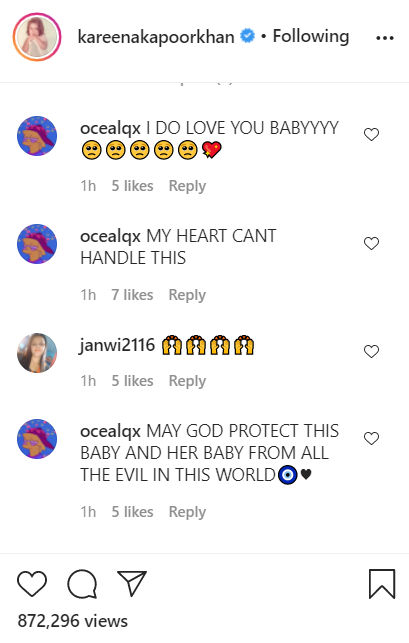 'Saifeena' is all set to welcome their second child soon. In August of this year, the couple who tied the knot in the year 2012 made an announcement. They've got a son who was born in 2016, named Taimur. The couple moved into a new house before they became parents for the second time. The actor had recently shared a picture of her new home in Mumbai, which is reportedly said to have spanned four floors for the soon-to-be four-member family.

Also read | Kareena Kapoor Khan Is All 'calm' As She Indulges In A Little Bit Of Yoga; Check Out