Unseen Pic Of The Day: Moon Moon Sen Posing With Her Daughters In This Pic Is Adorable

'Teen Patti' actor Raima Sen took to Instagram to share an unseen picture from her family album. She is seen posing with Moon Moon Sen and sister Riya Sen.

Teen Patti actor Raima Sen took to Instagram on Thursday, September 10, 2020, to share an unseen picture from her family album. The actor can be seen posing with her mother, Moon Moon Sen, and sister Riya Sen. Fans cannot stop themselves from commenting on the post.

Taking to her Instagram handle, Raima shared an unseen throwback picture which is truly unmissable. In the post, the actor can be seen as striking an adorable pose beside her mother and sister. Raima can be seen sporting a white backless top with a quirky design and a black pant. She completed the look with a small pendant chain and opted for middle parting sleek hairdo, well-done brows, kohled eyes, and dark lips.

Moon Moon can be seen wearing a black sheer saree along with a black blouse. She opted for a wavy hairdo, kohled eyes and dark lips. While Riya, on the other hand, can be seen sporting a white bralette and black leather pants. She also opted for a sleek hairdo, well-done brows and dark lips. Along with the post, Raima also penned a simple caption. She wrote, “#throwback @riyasendv #ðŸ’—”. Take a look at the post below.

Fans could not stop themselves from commenting on the post. The post also received several likes and positive comments from fans. Some of the users went on to comments on how stunning the duo look, while some were all praise for the picture and their work. One of the users wrote, “3 hot ladies sizzling the poster”, while the other one wrote, “Wow! Moon Moon, Riya and Raima are so beautiful”. Take a look at a few comments below. 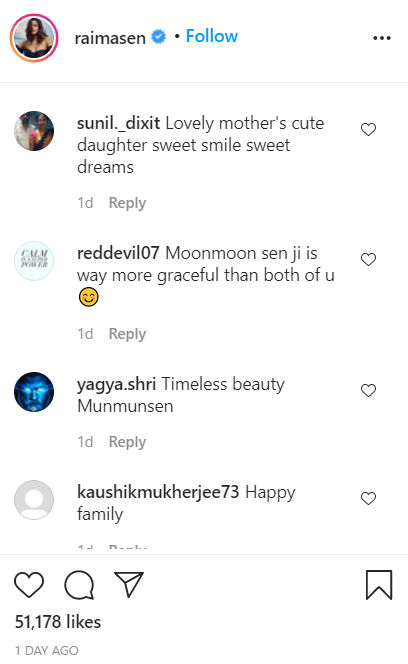 Apart from this picture, Raima often goes on to share several other throwback pictures with her mom and sister. Earlier to this post, the actor shared a regal family picture where the trio looks completely stunning. The post also received several likes and praise from netizens. Take a look at the picture below.

The actor will next be seen in the upcoming crime mystery drama series Black Widows. The show also stars Swastika Mukherjee, Mona Singh, Sharad Kelkar in pivotal roles. No much details about the show have been revealed by the makers or the cast. Post that, she will also be seen in Naveen’s Agni Siragugal alongside Arun Vijay and Vijay Antony in lead roles.

Also read | Living With The Tag Of 'sexy' At A Young Age Felt Horrible: Riya Sen