Neena Gupta recently took to Instagram to share a picture of herself with her fans and followers. The actor looked stunning in a blue saree with gold work

Actor Neena Gupta is quite active on Instagram and frequently posts pictures from film sets, photoshoots, and with her daughter, designer Masaba Gupta. The Badhaai Ho actor is known for her quirky social media posts with equally quirky captions and treats her fans with pictures from almost every place she visits. Read on to know about Neena Gupta's photos.

Also Read | Neena Gupta Shows Off Her Morning View In Mukteshwar With A Scenic Video; Watch

The Shubh Mangal Zyaada Saavdhan actor recently took to Instagram to share a stunning picture of herself. Neena Gupta could be seen in a pastel blue saree with gold work and paired it with a heavy gold necklace and a pair of matching gold earrings. The actor further accessorized her look with a gold ring and a bangle of the same color, matching her other jewelry. Gupta posed elegantly and looked regal in her short-hair traditional avatar. Her caption read, "Ye photographer ka kamal hai mera nahinðŸ˜ŽðŸ˜ŽðŸ˜ŽðŸ˜Ž" You can see her post here.

Neena Gupta enjoys a following of 730k followers on the social networking site and her latest picture received more than 30k likes less than an hour of posting it. Her friends, fans, and followers took to the comments section to compliment the actor on her picture. Celebrity chef Pooja Dhingra commented saying that the actor looked beautiful, while actor Prachee Shah Pandya left heart-eyed emoticons for Neena. You can see some of the comments on her post here. 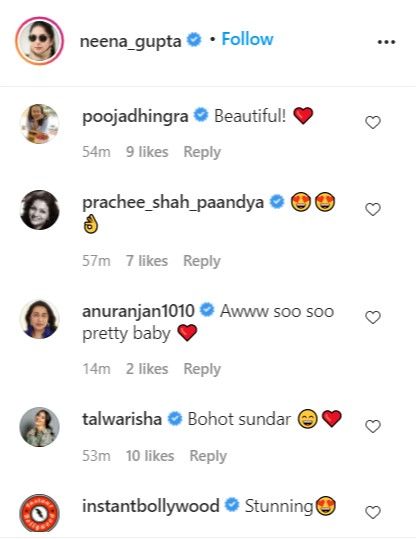 Neena Gupta won the National Film Award for Best Supporting Actress for her role as a young widow in the film Woh Chokri. She recently starred in Gwalior, Shubh Mangal Zyada Saavdhan, Panga, and many more films. Neena will soon be seen in the upcoming movie titled Sandeep Aur Pinky Faraar, starring Arjun Kapoor and Parineeti Chopra. She won the Filmfare Critics Award for Best Actress and received a nomination for the Filmfare Award for Best Actress for her role in Badhaai Ho in which she played the role of a middle-aged pregnant woman. Neena Gupta’s 2019 film, The Last Color, has been named in the list of feature films eligible for the 2019 Academy Awards in the Best Picture category. She played the role of a widow in the film.