Neena Gupta Shares 'Pinni' Poster As It Streams On Netflix

Neena Gupta took to Instagram on Monday, February 22, 2021, to share a poster of her released short film 'Pinni' as it streams on the OTT platform.

Bollywood actor Neena Gupta took to Instagram on Monday, February 22, 2021, to share a poster of her released short film titled Pinni. Along with the picture, the actor also penned a short note revealing that is film is streaming on the OTT platform. Fans went on to comment with all things nice as they promised the actor that they will watch the film soon.

Taking to her Instagram handle, Neena Gupta shared a poster image from her film Pinni. In the picture, the actor can be seen striking a simple pose where she is all smiles for the camera. Neena Gupta can be seen donning red and white salwar kameez along with a brown sweater. She also completed her look with simple jewellery and opted for a messy hairdo and no makeup. The post also read as, “Pinni. A story from Zindagi in short”.

Along with this post, the actor also penned a sweet note. She wrote, “Zindagi ki mithas khud hi sey toh hain. Watch #Pinni, a short film for Zindagi in Short on Netflix”. Take a look at the post below.

As soon as Neena Gupta shared the post online, fans went all out to flood the comment section with all things nice. Some of the users were all happy about the movie, while some promised the actor to watch the film soon. One of the users wrote, “Going to watch it tonight Neena ji”, while the other one wrote, “So nice, loved it. You are so good in anything that u do”. Check out a few more comments below. 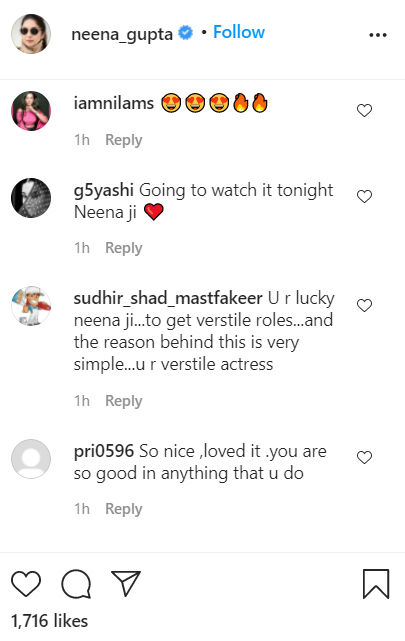 Pinni is a family drama film written and directed by Tahira Kashyap, Flipkart Video Original. The film stars Neena Gupta and Shishir Sharma in the leading roles. This short film is part of one of the seven segments of the short anthology film Zindagi. The film was produced by Guneet Monga under the Sikhya Entertainment banner and released on February 19, 2020.

It chronicles the life of Sudha, in her 60's, who is a happy, diligent homemaker who is acquainted with current affairs much against the general stereotyping of the homemaker. But her rebellion, once again true to her nature, is far from expected. The film is currently streaming on Netflix.