Bollywood star Neena Gupta has crossed the five lakh mark on Instagram. The actor recently took to her Instagram handle to express her gratitude to fans for their love and support. Neena Gupta shared an adorable video in the quirkiest way which will make fans smile.

Neena Gupta shared a video where she can be seen doing an elated dance in her backyard while thanking her fans for everything. With full of energy and happiness, she went on singing ,that the lyrics of which said that it's because of her fans’ love, blessing and support she was able to cross the five lakh mark on her Instagram handle.

The actor also looked stylish in the video as she can be seen sporting a checkered shirt, black pant and a leather jacket. She also opted for natural makeup and black boots. She captioned the video with, “Thank you, Thank you". Check out the video below.

Fans went on to congratulate the actor and also said a few kind words in the comment section. Some of her fans wrote, “Ma'am you are so sweet,” “Congrats. May you keep shining & keep us entertained. Xoxo,” “Congratulations. So well deserved.” Check out a few more comments from fans on her recent post. 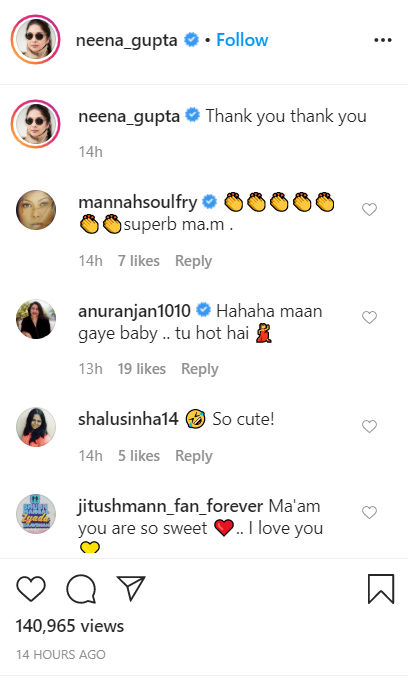 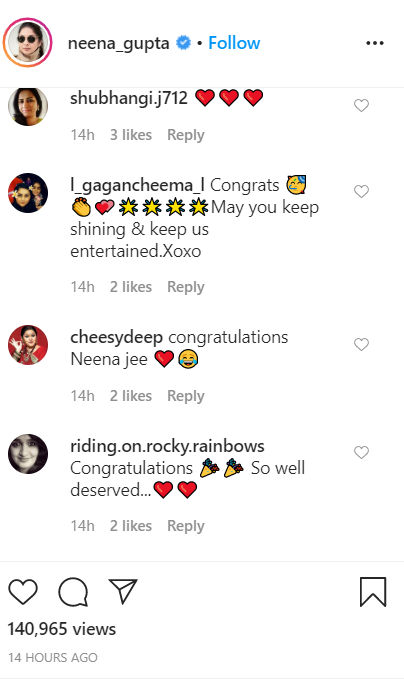 During this lockdown, Neena Gupta has been treating fans with adorable videos and also shows a few glimpses on she spends her day at home. The avid social media user keeps sharing several posts keeping fans entertained. As seen in her recent posts, Neena Gupta goes on to show fans how to bake a cake and also giving them some acting tips. The actor also shared a picture where she can be seen giving her husband a haircut. Seems like the actor is making the most of her time at home.

The actor was last seen in Hitesh Kewalya’s hit film Shubh Mangal Zyada Saavdhan. The film also starred Ayushmann Khurrana, Jitendra Kumar, Gajraj Rao in lead roles. The film was loved by fans and movie critics. The actor will next be seen Jaspal Singh Sandhu and Rajeev Barnwal’s upcoming film titled, Gwalior. The film also stars Sanjay Mishra in the lead role. The movie will be based on a thriller genre and as per reports, the film is currently in its filming stage.