She paired white pants and a floral printed white scarf. Neena also accesriosed her look with a pearl necklace and a pair of black sneakers. Meanwhile, on the other hand, Gajraj Rao looks simple in his casual look. He donned a check design shirt, tucked in black jeans. He also sported a pair of black boots. Check out Neena Gupta and Gajraj Rao's boomerang video.

Fans and followers of Neena Gupta were quick to share their response in the comment section. One of the Instagram users wrote, "This is so sweet. So adorable.. I love you both", while another added, "Why do I love you sooooo much!!!! Such a goddess". Another fan commented, "When we r going to watch both of you again". A fan comment read as "On screen couple, I would love to see again and again". Take a look at some more fans' reactions below. 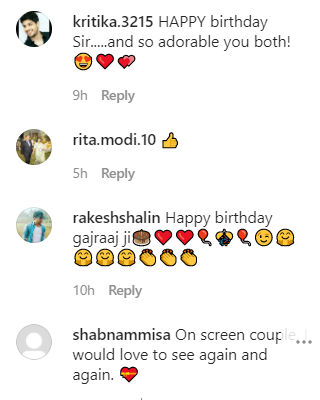 Also Read | Neena Gupta shows off her morning view in Mukteshwar with a scenic video; watch

After the success of Badhaai Ho, the pair was seen in Shubh Mangal Zyada Saavdhan. Here, Neena Gupta and Gajraj Rao played the role of Aman Tripathi's parents. Shubh Mangal Zyada Saavdhan also stars  Ayushmann Khurrana and Jitendra Kumar. They were last seen together in Disney+ Hotstar series, PariWar. While Gajraj played a lead role, Neena was seen in a special appearance.