Neena Gupta's pic wit Raghubir Yadav, her co-star in the Pradhan Pati of Phulera in the Panchayat web series. The actor did not reveal anything about the pic.

Neena Gupta is a popular Bollywood personality who never fails to inspire fans. She was recently seen in Amazon Prime’s web series, Panchayat where she played Manju Devi, the Pradhan of a village in UP. She recently took to her Instagram and posted a picture with her co-star Raghubir Yadav, who featured as the Pradhan Pati of Phulera in the series. The 60-year-old talented actor did not reveal anything about the photograph. But she accompanied the post with a hilarious caption which read,

The Badhaai Ho actor’s post received a comment from her co-star Maanvi Gagroo which read, “Hahaha! Love this pic and the caption."

Also read | Neena Gupta Knows How To Rock Comfort And Style; These Photos Are Proof 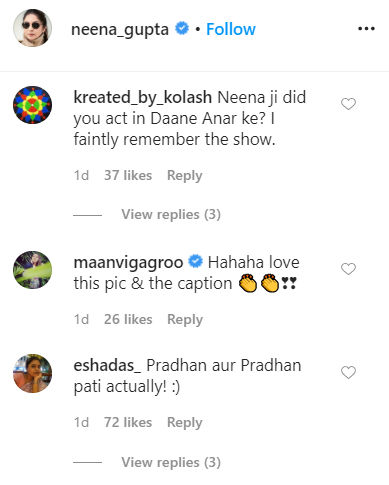 While talking about Neena Gupta’s equation with Raghubir Yadav, Neena Gupta said in a recent interview that, she has worked with Raghubir in Suraj Ka Satvan Ghoda and they will next be seen together in Sandeep Aur Pinky Faraar. She also said that they know each other since NSD days and no matter how long they stay out of touch, whenever they meet, they feel the same affection for each other every time.

The ‘Panchayat’ web series' cast includes Jitendra Kumar and Neena Gupta in lead roles along with Raghubir Yadav in an essential one. The story of the show revolves around a man named, Abhishek Tripathi and his life after he takes up a government job as the secretary or typically called as ‘Sachiv’, as the villagers call him. He is appointed as the Sachiv of the Phullera village Panchayat in Uttar Pradesh. Jitendra Kumar played the role of Neena Gupta's son in the film Shubh Mangal Zyada Saavdhan.

Talking about Neena Gupta’s recent work, she was last seen in Shubh Mangal Zyada Savdhaan, along with co-stars Ayushmann Khurrana, Jitendra Kumar, Gajraj Rao and Maanvi Gagroo. Neena Gupta has a remarkable filmography comprises films like Badhaai Ho, Raat Ke Saudagar, Bhagavad Gita, Veer, Mulk and Panga and many others. Neena Gupta has always kept updating her style and fashion statement to look the most beautiful and suit her character's demand perfectly.