Riddhima Kapoor Sahni took to her Instagram and shared a pic of food Neetu Kapoor made for her. Here is all you should know about Neetu Kapoor making food. Read

Neetu Kapoor has now taken over the kitchen at the Kapoor house. Neetu cooked a delicious meal for her daughter Riddhima Kapoor Sahni. Riddhima took to her Instagram and shared a glimpse of the gluten-free frankie that her mom cooked for her. Take a look at the post here to know more.

Riddhima Kapoor Sahni took to her Instagram on May 18, 2020, and shared a picture on her Instagram story where she was seen holding a frankie in her hand. She captioned the picture and wrote "Healthy dinner, gluten-free frankie." She also used that hashtag that said stay home stay healthy. She also tagged Neetu Kapoor in the picture. Take a look at the picture here. 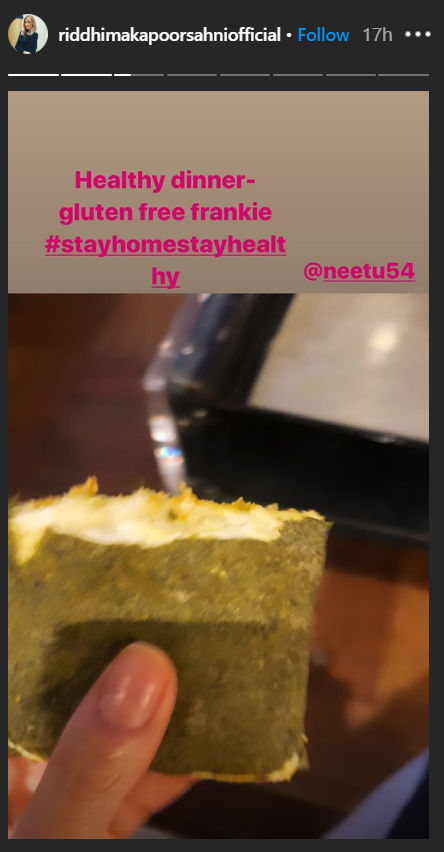 Apart from this, Neetu Kapoor had recently taken to her Instagram and had shared a family picture. In the picture, it can be seen that the whole Kapoor family is enjoying their time together. Neetu Kapoor captioned the picture and wrote, "How I wish this picture could remain complete as is â¤ï¸". Take a look at the post here.

After the death of legendary actor Rishi Kapoor, Riddhima Kapoor Sahni had taken to her Instagram and shared a post where she was seen remembering her father. In the post she shared she wrote, "Papa I love you I will always love you - RIP my strongest warrior I will miss you everyday I will miss your FaceTime calls everyday! I wish I could be there to say goodbye to you ! Until we meet again papa I love you - your Mushk forever â¤ï¸ðŸ˜¢". Take a look at her post here.

Veteran actor Rishi Kapoor passed away at the age of 67 in Mumbai on April 30, 2020, after a prolonged battle with leukaemia (a type of blood cancer). He had undergone extensive treatment for cancer in the US and returned to India in September 2019. After returning to India he was seen working in the film titled Sharmaji Namkeen. The makers of the film plan to wrap the film using CGI and will ready it for theatrical release.

PEOPLE HAVE PLEDGED SO FAR
LATEST NEWS
View all
2 mins ago
Shreyas talpade wishes to bring back theatre plays to the screen with his next 'typecaste'
1 hour ago
Riddhima kapoor sahni recalls kapoor family's christmas lunch with ranbir and rishi kapoor
1 hour ago
Katrina kaif or sonakshi sinha: whose chemistry with salman khan impressed audience?
28 mins ago
'thank you': hrithik roshan tells bhuvan bam after watching his latest titu talks episode
18 mins ago
Sonu sood is 'real hero' for a fan who pays him tribute with sand art; see pic