Amar, Akbar, Anthony actor Neetu Kapoor took to Instagram on Tuesday, January 19, 2021, to share adorable pictures of her doggo, Doodliana. Along with the picture, the actor also penned an adorable note revealing details about the same. On seeing this picture, fans have gone all out to comment on all things sweet.

Taking to her Instagram handle, Neetu Kapoor shared an adorable boomerang video of her dog, Doodliana, which is truly unmissable. In the video, Doodliana can be seen very cutely moving her head and also gives an innocent look. In another picture shared by the actor, Doodliana can be seen resting on the floor and striking a pose as she looks right into the camera.

Along with the posts, the actor also penned a note revealing how obsessed she is with her doggo. She wrote, “Doodlianaaaa â¤ï¸ in love ðŸ˜ obsessed ðŸ¤© #petlove#pure #unconditional”. Check out the post below.

As soon as the actor shared the post online, fans went on to share happy comments. The post also received several likes and comments from netizens. Some of the users commented on how cute Doodliana is, while some could not stop gushing over her doggo’s pose. One of the users wrote, “hahaha, this is so cutee”. While the other one wrote, “such a cutiepiee”. Take a look at a few comments below. 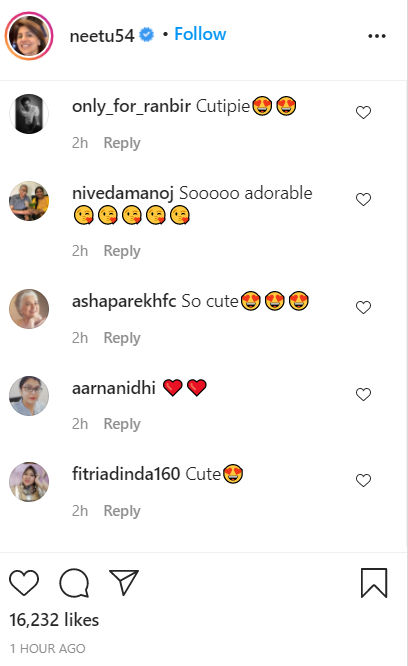 Also read | Neetu Kapoor Shares Appreciation Post For Her Kids, Says 'thank You Both For Holding On'

Apart from this picture, Neetu Kapoor goes on to share several pictures, videos, stories and more of her doggos Doodle and Doodliana. Earlier to this post, the actor shared a sweet picture of Doodle on the occasion of World Animal Welfare Day. Along with the picture, she also wrote, “I can almost feel doodle praying for the welfare of animals all over also praying to god to use his magic wand n erase all the negativity around in these very harsh n challenging times”. Take a look at the post below.

Earlier, Neetu Kapoor also shared a post featuring Rishi Kapoor with a collage of the different roles of the late actor during his career. Her caption also read, "Mera Naam joker released on 18th Dec. 1970... today would have been his 50 years in the Indian film industry #rishikapoor". Take a look at the post below.