Neha Dhupia Quips 'should I Be Worried?' As Angad Bedi 'spotted With Woman' In Maldives

Neha Dhupia quipped if she should be worried as Angad Bedi was 'spotted with woman in black bikini and face covered' in Maldives. Mehr has also joined the trip.

Maldives seems to be go-to destination for Bollywood stars at the moment. Recently, Taapsee Pannu and Mouni Roy’s trips to the popular destination and Varun Dhawan's visit had made headlines. Now, Neha Dhupia also announced that she was in Maldives with a quirky picture with Angad Bedi.

Neha Dhupia on Angad being spotted in Maldives

Neha Dhupia shared a snap of Angad Bedi being spotted with a ‘woman in black bikini and face covered’ in Maldives. She quipped ‘should I be worried?’

@angadbedi spotted in Maldives with a woman in black bikini and face covered ðŸ™ˆ ... should I be worried ??? ðŸ¤ª @movenpickkuredhivarumaldives

Aparshakti Khurrana had a quirky reaction on Neha Dhupia trying to hide herself. The actor-host quipped how Angad could be in trouble.

READ: Angad Bedi Shares Glimpse Of His Character 'Bhaskar Shetty' From His Next 'Mumbhai'

Their daughter Mehr has also joined the couple, as she enjoyed the 'Mickey Mouse Club.' Neha posted pictures of the little one enjoying on her Instagram stories. 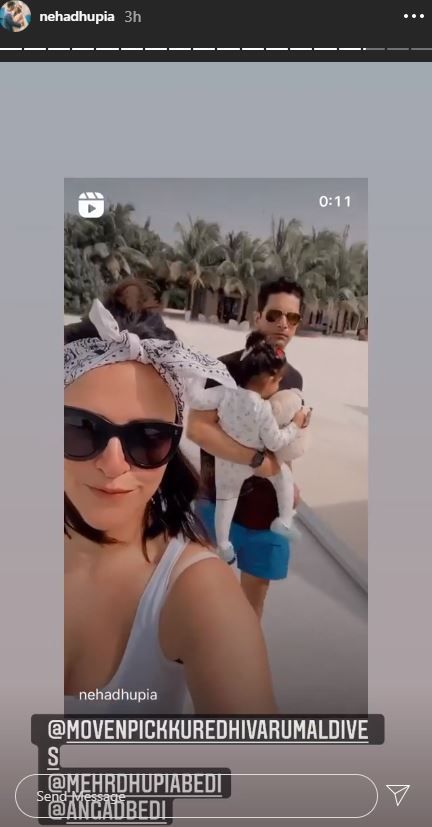 Neha Dhupia had two ventures as hosts that is on air currently. She is putting celebrities on the spot in the podcast No Filter Neha and making contestants go through the grind in the TV show Roadies Revolution.

Angad Bedi played an Armyman in Gunjan Saxena: The Kargil Girl. He is now set to feature in a web series titled Mum Bhai. The actor is currently in the news for the release of his character poster. He is seen sporting a moustache and wielding a gun, as he played the character of Bhaskar Shetty.

READ: Angad Bedi Shows Netizens How To Use A Fire Extinguisher; Fans Thank Him For 'Useful Info'