Nora Fatehi joined the sets of Sony TV's India's Best Dancer, as a special guest judge on September 13. In the episode, Bharti Singh poked fun at Salman Yusuff Khan, who also graced the episode along with Zaara Yesmin. Bharti informed Nora that Salman wanted to dance with her. After this, Terence Lewis accompanied Fatehi on the stage.

Nora and Salman Yusuff Khan danced to the tunes of- Illegal weapon 2.0, from their film Street Dancer 3D. Geeta Kapur was surprised to watch the duo dance. Sony TV's official social media handle shared a glimpse of the same. Sharing Nora Fatehi and Salman Khan's video, the makers wrote, "Look at Salman and Nora lighting sparks all over! Moment hai, boss!
There’s more on the other side of the week, on India's Best Dancer. Set your reminders for next Sat-Sun at 8 pm."

As soon as the video was up, fans flooded the comments section with love. A user wrote, "Omg what a performance." Salman Khan also shared a glimpse of the same on his official Instagram wall. "You and Nora Fatehi, Omg what a chemistry guys you're killing it," commented a fan on Salman Khan's Instagram post. 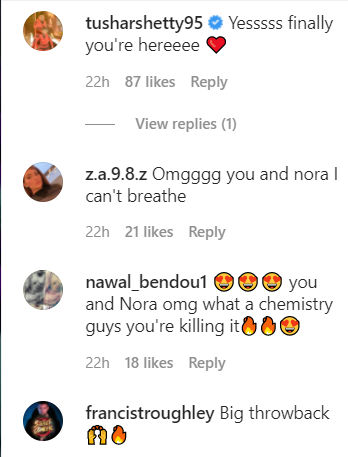 Nora Fatehi joined the show, India's Best Dancer, in place of Malaika Arora, who was one of the judges on the panel. Malaika tested positive for the novel Coronavirus on September 8. Along with Salman Yusuff Khan and Zaara Yesmin, Mere Dad Ki Dulhan's cast including Shweta Tiwari, Varun Badola and Anjali Tatrari also graced the show.

Salman Khan and Zaara Yesmin's new music album titled Kandhe Ka Woh Til released on September 10, 2020. Presented by T-Series, the song is voiced by Sachet Tandon and helmed by The Real Emotions. The music is given by Manan Bhardwaj and penned by Kumaar. Kandhe Ka Woh Til song has hit 15M views within four days of its release. The emotional track chronicles the tale of how Salman reminisces his fond memories with Zaara. Check out the duo's pics and video below.