On Bobby Darling's Birthday, Here's A Look At What The Actor Is Up To These Days

Bobby Darling is a well-known actor who has been a part of several movies and tv shows. On Bobby Darling's birthday, here's a look at the actor's whereabouts

Bobby Darling aka Pakhi Sharma, a well-known actor in Bollywood, television and the regional film industry, has turned a year older today, January 10, 2021. The actor has been a part of several movies, ads and television shows. The actor has an active fan following on social media and often goes on to make headlines with pictures, videos and much more on her respective social media handle. Talking about the actor, here’s a look at what Bobby Darling is up to these days.

Where is Bobby Darling these days?

Bobby Darling was last seen playing the role of Karry in Tiyasha Roy starrer TV series, Krishnakoli that released in 2018. After that Bobby Darling is mostly away from the entertainment industry. By the looks of it, seems like the actor has taken a sabbatical on her acting career for now. However, she is among the most active members on social media. Bobby Deol often goes on to give fans updates about her life through her respective social media handles.

A recent photo of Bobby Darling went on to make rounds on social media and also left a netizen asking if the actor was pregnant. The message received the attention of Bobby Darling, and here's how she reacted to the netizen's comment. Bobby Darling uploaded a picture where she can be seen donning a black dress along with an orange stole. She completed her look with minimal jewellery and also opted for minimal makeup. In the picture, the actor can also be seen resting her hand on her stomach. Along with the picture, the actor also wrote, "Ye Kiska Intezaar aye Tanhaa Dil". Take a look at Bobby Darling's Instagram post below.

As soon Bobby Darling shared the post online, a fan left a comment asking if she was pregnant. The fan wrote saying, "Hi! Bobby, R u pregnant? (sic)". On reading the comment, the actor replied with two laughing emojis. Take a look at the comment below. 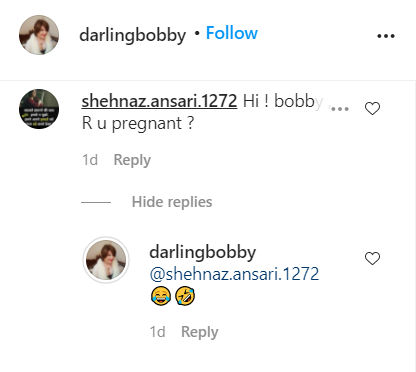 Bobby Darling has been seen in several movies and television shows. She began her career with the 2001 film Style alongside Sharman Joshi, Sahil Khan, Riya Sen in lead roles. Post that the actor went on to star in films Navarasa, Chalte Chalte, Na Tum Jaano Na Hum and many more. She was recently seen in the TV series, Krishnakoli alongside Neel Bhattacharya, Rimjhim Mitra, and Tiyasha Roy in lead roles.

Also read | 'Evil Under The Sun' Cast Boasts Of Colin Blakely, Peter Ustinov And Many More