Anushka Sharma's digital debut with her show Paatal Lok is not just winning the hearts of her fans but her friends from the industry as well.

Anushka Sharma's digital debut with her show Paatal Lok is not just winning the hearts of her fans but her friends from the industry as well. This series was released on May 15, 2020, on Amazon Prime Video and has been getting a lot of appreciation. Actor Anushka Sharma has been promoting the show on all her social media platforms. After watching the show, several celebs have given reviews on the web series. Arjun Kapoor seems to be overjoyed after watching the show and went “extremes” to express his happiness.

The Ki and Ka actor shared videos on his Instagram story where he expressed his happiness after watching the show. Arjun in the video can be seen telling his fans that he stayed awake till 2 am in the morning to watch all the intriguing episodes of Paatal Lok. Having said that, the actor then can be seen showing off some action-packed stances which he thought was his way of expressing his happiness and excitement.

In the following video, he apologized to Anushka Sharma for his “extreme reaction” and wrote that there was no other way he could think of to react for Anushka’s latest show. He wrote that “Paatal Lok was off the hook! Loved it.” Apart from Arjun, Bollywood’s powerhouse actor Ranveer Singh also poured in his heart for the web show. The 83 actors shared the poster of the show on his Instagram story and captioned it by writing “straight-up- scorcher.” 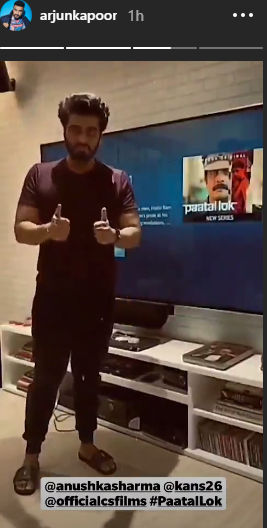 Bhumi Pednekaralso appreciated the work of Anushka Shara and praised the storyline of the show. Bhumi Pednekar took to her Instagram story on May 20, 2020, and shared a picture of the series and also wrote how she felt after watching the show. In her story, she wrote "So I binge-watched #pataallok and it is out of the world. Everything abt the show is on point. From the performances, dialogues, the way it was shot, the bgm, edit, casting like everything...Take a bow team And Ofcourse a big big shout out to @jaideepahlawat Sir Matlab and the entire cast actually, I can't pick a favorite cause you all were brilliant. The series has taken Indian content generation to the next level!". After this, Anushka Sharma shared the post on her story and thanked her for her wishes by writing "Bhumi" and added hug face and kiss emoji.