Panga Trailer To Be Out On This Date, Reveals Kangana Ranaut

Panga Trailer is to be out soon. Kangana Ranaut revealed the date of the trailer release on her team's Instagram story. Read to know more about the date.

Kangana Ranaut is currently gearing up for the movie Thalaivi. The movie is based on the biopic of Jayalalithaa, the former Chief Minister of Tamil Nadu. The actor has been preparing for the movie for a long time now. She was recently also seen preparing for another movie in her kitty, titled Panga. The movie is based on the story of a national level Kabaddi player. It depicts the triumphs and failures of the player. The movie is scheduled to hit the theatres on January 24, 2020. The announcement of the trailer to be out in December has already notched up the excitement level of fans. And finally, Kangana has revealed the release date of the trailer.

Kangana Ranaut’s team on November 27, 2019, did a QnA on Instagram. Kangana was seen answering questions about several different things related to her personal and professional life. The actor was asked about the Panga trailer release date. Kangana Ranaut, in excitement, abruptly told the date however she stopped in between and confirmed with her team that whether she should reveal it or not. Later, she informed her fans that the trailer would be releasing on December 23, 2019. 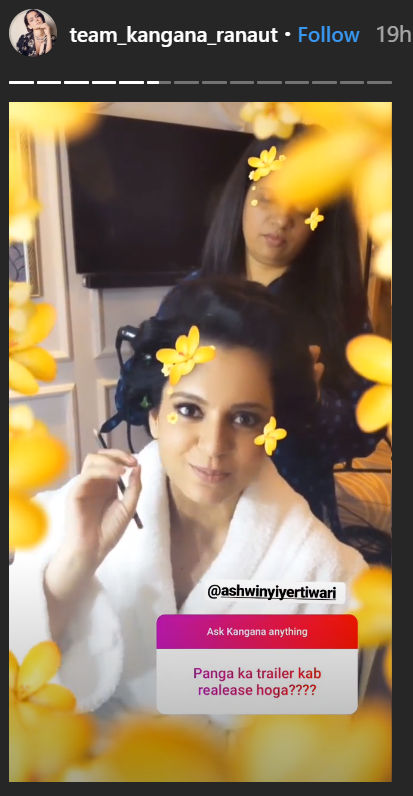 A few months back, a picture from behind the scenes of the sets of Panga was shared by Ashwiny Iyer, the director of the movie. In the picture, Kangana was seen playing Kabaddi. Ashwini, in the caption of the picture, wrote, “We are gearing up to #Pangastories”. The Delhi schedule of the film was wrapped up only recently. Panga will also be featuring Richa Chadha, Neena Gupta, Pankaj Tripathi, and Jassie Gill alongside Kangana Ranaut. The first sequence of the film was shot in Bhopal. The next sequence of the film will be shot in Kolkata according to Kangana Ranaut's Instagram post.

Also Read| Kangana Ranaut At Republic Summit: Didn't Leave Home To Give Hell To Parents, Had A Vision

Also Read| WATCH: Kangana Ranaut Reveals When She Got Her First Paycheck, What She Did With It

Ranaut made her debut with the 2006 film, Gangster, for which she was awarded the Filmfare Award for Best Female Debut. Ranaut has featured in several successful films like Queen, Woh Lamhe, Raaz: The Mystery Continues, Once Upon a Time in Mumbai, the romantic comedy sequels- Tanu Weds Manu and Tanu Weds Manu Returns. She also appeared in a Tamil film named Dhaam Dhoom. Kangana Ranaut was last seen in the movie, Judgementall Hai Kya, opposite Rajkummar Rao.

Also Read| 'I Am An Obsessive Lover,' Says Kangana Ranaut At The Republic Summit