Pankaj Tripathi shared a quirky video of as he throws a unique virtual bash for Instagram followers and this video is sure to make fans smile. Take a look.

Actor Pankaj Tripathi, known for his roles in films like Mirzapur, Ludo, Stree, Gangs of Wasseypur, and more, has crossed the three million mark on Instagram. The actor took to his Instagram handle on Friday, January 15, 2021, to express his gratitude to fans for all their love and support. Pankaj Tripathi shared a quirky video of as he throws a unique virtual bash for Instagram followers. This video is sure to make fans smile.

Taking to his Instagram handle, Pankaj Tripathi shared a video where he went on to thank fans and also went on to celebrate it virtually with his fans. In the video, the actor said that he just got to know that he has connected with three million people on Instagram. He also went on to thanks fans for connecting with him via social media. He also added that on this occasion he is throwing a virtual party and asked everyone to go to their kitchen and drink a glass of water along with five deep breathing. He concluded saying, thank you so much for liking him, connecting with him and he is very grateful for it.

Along with the video, the actor also penned a sweet note for all his fans. He wrote, “बहुत स्नेह . With love”. Take a look at the video below.

As soon as Pankaj Tripathi shared the video online, fans went all out to comment on all things happy and nice. The post went on to garner heaps of praise and likes from netizens. Some of the users went on to congratulate the actor for all his achievements, while some went all gaga over the video. One of the users wrote, “you deserve more”. While the other one wrote, “congratulations sir. Lots of love to you”. Check out a few comments below. 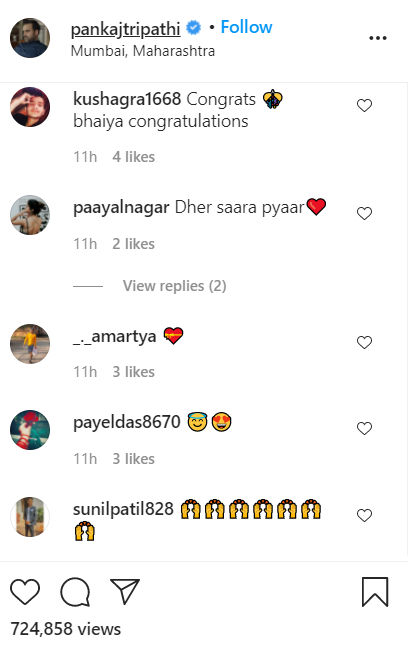 The actor was recently seen in the much-acclaimed show, Criminal Justice: Behind Closed Doors where he reprised his role as Madhav Mishra. The 8-part courtroom drama series has been helmed by Bollywood’s Rohan Sippy, Arjun Mukerjee and penned by Apurva Asrani. The show has been bankrolled by Applause Entertainment in association with BBC Studios. The show currently air on exclusively on Disney Plus Hotstar VIP.