Parineeti Chopra Awaits Release Of The Girl On The Train, Spills An Expletive In Disguise

While expressing excitement about 'The Girl On The Train's' release, Parineeti Chopra spilt an expletive in her caption, leaving a bunch of her fans hurt.

Actor Parineeti Chopra has been teasing fans with intriguing posters and promos from her upcoming movie The Girl On The Train. On Tuesday morning, Parineeti took to her Instagram and posted an array of pics from her latest shoot and mentioned that her film is just ten days away from its release. However, in the caption, the actor spilt an expletive in disguise which did not go down well with a bunch of her followers.

Sharing her photos, Chopra wrote, "Only 10 days left? F***. Till then, I’ll just enjoy dressing up." As soon as her posts were up on the internet, many fans expressed excitement about her movie. However, a user asked, "Why to use slang words in the caption?." Meanwhile, in the photos, Parineeti sported a black knitted sweatshirt and teamed her outfit with leather pants. She opted for bold smokey eyes and wore a pair of heels. The Girl On The Train is all set to release on February 26, 2021, on the digital streaming platform, Netflix.

Parineeti spills an expletive in her caption 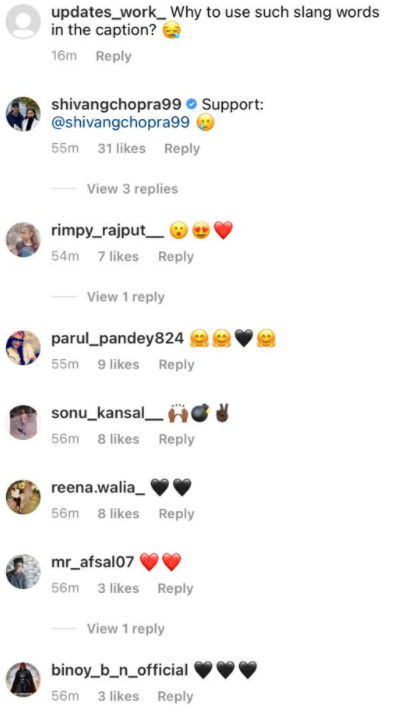 Earlier, while sharing a glimpse of her song, Chhal Gaya Chhala, Chopra mentioned, "I think I did this film as an actor, for this song. Keeping tears in my eyes for 2 days, I needed a day off after this shoot. I was exhausted but happy. Thankyou Ribhu, for letting me capture this on camera once in my life." The song is sung by Sukhwinder Singh and the music is composed by Sunny Inder. The number has surpassed 5.8M views online and is still counting.

The Girl On The Train follows the story of Mira, played by Parineeti Chopra, a divorcee who watches how other couples around her are enjoying the bliss in their relationship. She dives deeper into the world of darker thoughts and soon stumbles upon a shocking truth. Apart from Parineeti, the movie also stars Aditi Rao Hydari, Kirti Kulhari and Avinash Tiwary in pivotal roles. Directed by Ribhu Dasgupta, the film is based on Paula Hawkins' 2015 book of the same name.

Also Read | Did Eijaz Khan & Pavitra Punia Have A Fight? Know Why The Latter Is Promising More Of It