Recently a paparazzi account shared their instance of taking precautions ahead of Coronavirus scare, the move was lauded by many celebrities.

Amidst the major Coronavirus outbreak, film actors and production houses are taking a break or pushing the schedule ahead. This comes after the rise of numbers of people confirmed with the novel COVID 19 coronavirus cases. In another precautionary move, a major paparazzi team, Viral Bhayani, has decided to take a break. Famous for covering celeb appearances and tit-bits, Viral is taking a break for ‘the first time’. The move was appreciated by several celebrities including Parineeti Chopra, Sophie Choudry, Amyra Dastur and many others.

Even though the registered cases are comparatively lesser than the origin country China and the second most affected country Italy, Maharashtra along with other states have taken major precautionary measures including shutting down major malls and multiplexes. The paparazzi group followed the foot-steps of the authority. According to the official Instagram post of the paparazzi, Viral Bhayani, the team has decided to not to cover the celebs as rigorously. According to reports, Viral Bhayani had the most engaging content on the Instagram account, which will slow down amidst the coronavirus scare. This move comes after the WHO (World Health Organisation) declared Coronavirus as a pandemic.

Viral Bhayani’s post read, “Yeah after ages I feel like a human being. Very few phone calls, my WhatsApp is not buzzing and I hopefully will be able to clear my Gmail box which has exceeded 102 GB. As things get really bad as we speak we have all decided to take our camera offline for few days till the virus is in control. This has never happened ever in the past as no matter what happens - we never stop. But somethings are to be taken more seriously as #CoronaVirus #covid_19 is a major threat to all of us. Our teams will get some time off to spend with their family.”. The move was lauded by celebrities like Parineeti Chopra and Sophie Chaudhary. Parineeti Chopra wrote, “THE BEST BOYS IN THE BUSINESS”, on the other hand, Sophie Choudry asked the boys and crew to be safe amidst the pandemic spread. Even Amyra Dastur asked the paps to be safe. 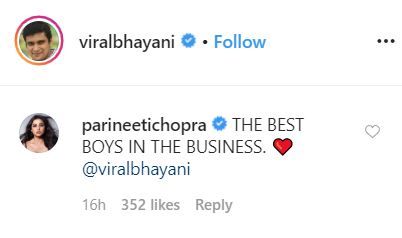 Check out what Sophie Choudry wrote 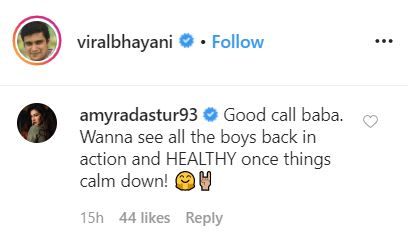